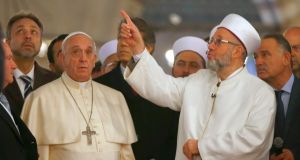 Pope Francis listens to Rahmi Yaran, Mufti of Istanbul during a visit to the Sultan Ahmet mosque, popularly known as the Blue Mosque, in Istanbul. Photograph: Tony Gentile/Reuters

On the second day of his highly symbolic trip to Turkey, Pope Francis this morning joined the Grand Mufti of Istanbul, Rahmi Yaran, in a moment of prayer during a visit to the celebrated Blue Mosque, one of Islam’s holiest sites.

As he was being shown around the magnificent mosque, the Pope apparently suggested that the two men should pray together, which they then did. Afterwards, the Grand Mufti told the Pope:

“We need prayers so much.”

The joint prayer by the two leaders was a highly symbolic moment on a visit which is clearly focused on improving inter-religious and ecumenical relations, at a time when east–west and Catholic-Muslim tensions have been obviously exacerbated by Isis violence in neighbouring Syria and Iraq.

Given that context, this visit to 76 million-strong, 99 per cent Islamic Turkey is being played out against a background of understandably tight security arrangments.

When the pope arrived at the Blue Mosque this morning from Istanbul’s Ataturk airport, he travelled along streets lined with police. Rather than travelling in his celebrated opentopped ‘Popemobile’, he travelled in an ordinary Renault limousine, followed by two secret service Hummers. Overhead at least one drone and one military helicopter patrolled the scene.

As he stepped out of his car in front of the Blue Mosque, he was greeted with timid applause from the modest crowd, many of whom were weekend tourists. One man standing near your correspondent began to shout “Allah Akbar” (Allah is Great) but he quickly desisted as police moved in his direction.

The heavy police presence around the Blue Mosque and the nearby Ayasofya or Santa Sofia museum was such that the large policemen blocked the view for many onlookers. Diminutive Italian nun Sr Sophia, who has lived for 39 years in Turkey and who struggled to get a glimpse of the pope, told The Irish Times:

After his visit to the Blue Mosque, the pope then travelled 300 yards to the nearby Ayasofya or Santa Sofia museum, a 1400-year old building which in itself embodies much of Turkey’s complex past.

Having served as an Orthodox patriarchal basilica for more than 1,000 years until the then Constantinople was conquered by the Ottomans in 1453, the Ayasofya was then turned into a mosque.

It remained a mosque until 1931 when Mustafa Kemal Atatürk, the founder of the modern Turkish republic converted it into a museum. The future of the Ayasofya remains uncertain with many believing that it could yet be turned back into a mosque. After his visit, the pope left a telling message in the visitors’ books, writing:

“Quam dilecta tabernacula tua Domine (Psalmus 83). Contemplating the beauty and harmony of this sacred place, my soul rises to the Almighty, source and origin of all beauty, and I ask the Almighty to always guide the hearts of humanity on the path of truth, goodness and peace.”

Even as the pope left the Ayasofya, there was a very clear reminder of the cultural context of Istanbul as the loudspeakers rang out with the muezzin’s call to prayer in the Blue Mosque. Later on Saturday, the pope was due to celebrate mass in the small Catholic Church of the Holy Spirit, which stands hidden from view off a busy downtown thoroughfare.

The pope will also offer a prayer at the St George Orthodox church, seat of the Ecumenical Patriarch of Constantinople, Bartholomew 1.

On Sunday, he will join Bartholomew in a three-hour long service to celebrate the feast of St Andrew, patron saint of the Orthodox church.

After the service, the two men will sign a joint declaration intended to underline the improving relations between two churches which have been split since 1054.

On the first day of his visit on Friday, the pope met with Turkish president Recep Erdogan in Ankara, describing Turkey as a country which is “a natural bridge between two continents and diverse cultures”. The pontiff also praised the generosity of Turkey for having taken in more than two million Syrian and other refugees.

In response, Mr Erdogan pointed an accusatory finger at Syrian president Bashar al-Assad, whom he accused of conducting “state terrorism” in his own country.

He also argued that the economically downtrodden “masses” of the Islamic world, “pushed into poverty”, have been exploited by extremist groups such as Isis and Boko Haram.