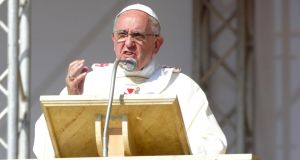 “The ’Ndrangheta [Calabrian mafia] represents the adoration of evil and total contempt for the common good . . . Those who in their lives have chosen this path of evil are not in communion with God, they are excommunicated.”

Pope Francis’s words to a 250,000 strong crowd in Piana de Sibari, Calabria, on Saturday represent an unprecedentedly strong rejection of organised crime. Remarkably, even though organised crime controls an estimated 8-10 per cent of Italian GDP, no pope has ever previously seen fit to excommunicate the Mafia.

Curiously, the church had no such reticence with regard to Italian communists, who were excommunicated by Pope Pius XII in 1949.

During a famous visit to the Valley of the Temples in Agrigento, Sicily, in May 1993, a visibly angry John Paul II called on Mafiosi to “convert yourselves”, adding that “one day the judgment of God will come”.

However, he stopped short of excommunicating the Mafia, thus imposing the church’s most severe censure and one which “deprives the guilty Christian of all participation in the common blessings of ecclesiastical society”, according to the Catholic Encyclopedia.

In essence, the excommunicated become exiles from Catholic society and can neither attend public Mass nor receive the Eucharist or any other sacrament. Just how Mafioso will be identified by priests, however, remains unclear.

What is clear, though, is that the Pope has struck an important blow against organised crime societies, which lay much emphasis on Catholic iconography and pretend its “men of honour” act is in respect of some sort of code of ethics.

Roberto Saviano, author of Gommorrah, an exposé of the Camorra Mafia in Naples, yesterday called the Pope’s judgment a potentially “epoch-changing moment”, saying it unmasked the “nDrangehta’s self-celebratory depiction of itself as some sort of Robin Hood outfit”.

Senior ‘Ndrangheta investigator, Nicola Gratteri, one of many prosecutors who lives under constant police protection, welcomed the Pope’s words, telling newspaper Il Fatto Quotidiano yesterday: “This was a courageous speech and one that we’ve been waiting for more than a century . . . This is an invitation to all Catholics and an order to all priests and bishops. No more ambiguity in relations with mafia bosses.”