Salah Abdeslam, who fled to Belgium, may have changed his plans at the last minute 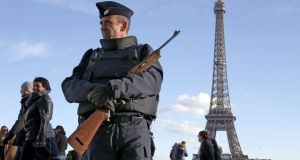 French police believe the jihadist gang that carried out eight coordinated attacks in Paris may have planned to strike another target in the city but that one member of the group changed plans at the last minute.

Investigators are increasingly convinced that Salah Abdeslam, a 26-year-old French national who has been on the run since the November 13th atrocities, had planned to attack a target in or near Montmartre, in the north of the city, on the same night that 130 people were killed in a series of bombings and shootings elsewhere in the city.

Police are looking into two possibilities, according to sources quoted by Le Journal du Dimanche: that Abdeslam had a late change of heart or that his explosive vest failed to detonate.

Police believe Abdeslam may have driven the three Stade de France bombers to the stadium before moving on to the 18th arrondissement.

A Renault Clio which they believe was used in the stadium attacks was found the following day at Porte de Clignancourt, which is 2km directly north of Montmartre. Mobile phone records also indicate that Abdeslam was in the 18th arrondissement on the night of the attacks. According to Le Novel Observateur, the phone records suggest he then went to Montrouge, a southern suburb of Paris, where he was collected by two friends and driven to Belgium.

A car carrying the three men was stopped at a checkpoint just south of the Belgian border later that morning but police waved them through as none of the men was the subject of an alert. The two friends were subsequently arrested by Belgian police but Abdeslam remains at large.

In their police interviews, the two friends have said Abdeslam called them on Saturday morning and asked them to collect him from Paris. They said he was wearing an explosive vest and was in a state of “shock”, Le Novel Observateur reported.

The latest developments suggest Abdeslam was not one of the three men who opened fire on three cafés and restaurants in the 10th and 11th arrondissements, as police initially believed. They suspect one member of that group was Abdelhamid Abaaoud, the architect of the attacks, who was killed during a seven-hour shootout with police at a flat in the northern suburb of Saint-Denis last Wednesday.

In an interview with the Belgian TV station RTBF at the weekend, Mohamed Abdeslam, the men’s brother, said he believed Salah backed out at the last minute. “It’s more than a hope – I’m convinced of it,” he said, before calling on his brother to hand himself in to police.

Meanwhile, investigators are still working to establish who produced the explosive vests. One possibility is that the bombmaker was the second – still unidentified – man who died during the gunfight in Saint-Denis last week. A woman, Hasna Aït Boulahcen, was also killed during the standoff, though police clarified on Saturday that she did not die by detonating an explosive vest, as they had initially believed.

Meanwhile, the French Police Nationale released a photograph of the third man they believe carried out the bomb attack on the Stade de France last week, and appealed for help in identifying him.

The man’s image was accompanied by a message that read: “This individual is the third dead perpetrator of one of the attacks carried out on 13 November at the Stade de France.”

Yesterday, investigators extended into a fifth day the detention of a man arrested on Wednesday outside the Saint-Denis building where Abaaoud and two others were killed. The man, Jawad Bendaoud, told reporters he had been asked to put two people up in his apartment for three days, but had no idea they were terrorists.

Police have already released the seven other people detained during the assault on the flat.

1 Des Bishop apologises to Traveller community for comments in interview
2 One hundred Irish retailers for all your online Christmas shopping
3 Miriam Lord: All test and no trace makes Jack, and heaven knows who else, a very ill boy
4 Gym owner plans to defy restrictions and open
5 Suzanne Lynch’s US Election Diary: Trump ‘walks out’ of TV interview at White House
Real news has value SUBSCRIBE