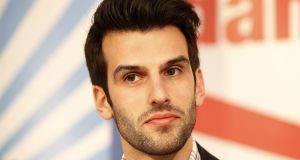 Udo Landbauer: “For me it’s clear these [extremist] songs were not sung,” he said on national television. “I’m not that much of a singer.” Photograph: Dieter Nagl/AFP/Getty Images

The FPÖ took office a month ago but its lead candidate in a regional election on Sunday has emerged as a member of an academic fraternity with extremist traditions.

Udo Landbauer, the 32-year-old leader of the FPÖ’s campaign in the state of Lower Austria, joined the “Germania” group aged 15. According to magazine Falter, Germania’s songbook contains lyrics mocking the Holocaust’s six million dead and Israel founder Ben Gurion: “The Jew Ben Gurion stood in their midst: ‘Step on the gas, you old Germanic people, we’ll manage the seven million.”

Other songs glorify the Geraman legion Condor, which destroyed the Spanish city Guernica in the civil war, and Wehrmacht atrocities in Crete.

Oskar Deutsch, head of a group representing Vienna’s Orthodox Jewish community, said his group would stay away from a Holocaust memorial event hosted by the Austrian parliament.

“This is typical FPÖ and something we don’t want in Austria,” said Mr Deutsch.

Austrian president Alexander van der Bellen has condemned the student association and its songs, and questioned Mr Landbauer’s suitability for public office. “I couldn’t believe my eyes when I read the texts, that it is possible to glorify mass murder,” he said.

Mr Landbauer says he was unaware of the songbook contents until media reports and was so outraged he had suspended his membership until an investigation was completed.

“For me it’s clear these songs were not sung,” he said on national television. “I’m not that much of a singer.”

On ORF public television news he was asked why he joined an organisation with the motto, “German and true, in hardship and death”. Mr Landbauer, son of an Austrian father and Iranian mother, said this dated from Germania’s foundation in 1917 and he was not aware of xenophobia or anti-Semitism in his student organisation or in his political party.

Two months ago, an FPÖ candidate was excluded from taking his parliamentary seat after a photo emerged of him giving the Hitler salute. Another party MP, Wolfgang Zanger, said the National Socialist movement “had good sides, but we don’t hear of them any more”.

Three weeks ago an FPÖ official liked a neo-Nazi song on his Facebook profile while another described asylum seekers as “cave people”. Mr Landbauer is on the record as describing the former interior minister Johanna Mikl-Leitner, a key figure in the refugee crisis, as a “Muslim mama”.

Ahead of Sunday’s Lower Austria election, the FPÖ is running third on 16 per cent. In October’s national election, it took 26 per cent and entered government as junior partner under the conservative People’s Party (ÖVP).

In a tweet, conservative chancellor Sebastian Kurz condemned the song texts as “racist, anti-Semitic and absolutely disgusting, for which there can be no place in our country”.

His coalition partner Heinz-Christian Strache, vice-chancellor and FPÖ leader, also criticised the texts but saw no reason for the regional politician to stand down.

“These pages were torn out or blacked out in 1998 and Udo Landbauer has assured me he didn’t know of these texts,” he said, insisting the FPÖ had nothing to do with Austria’s controversial student associations.

Viennese police are braced for violent protests on Friday evening when the FPÖ co-hosts the “Academic Ball” in the Hofburg palace.

The annual meeting is a major event in Austria’s far-right calendar, and is organised jointly by the party with the umbrella organisation of Austria’s student and graduate associations, many with strong nationalist and far-right character.