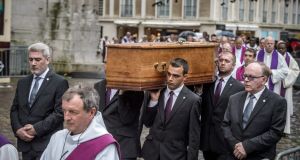 The coffin of priest Jacques Hamel is carried into the Notre Dame cathedral in Rouen for his funeral ceremony. Fr Hamel was killed on July 26th in a terror related attack, in Saint-Etienne-du-Rouvray. Photograph: Christophe Petit Tesson/EPA. 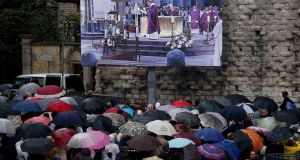 Mourners gather in the rain near a screen outside the Cathedral in Rouen, France, where the funeral service in memory of Fr Jacques Hamel is taking place. Photograph: Jacky Naegelen/Reuters. 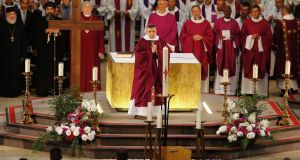 Archbishop of Rouen Dominique Lebrun (C) prays at the Rouen cathedral in northern France during the funeral of Fr Jacques Hamel, the 85-year-old priest who was murdered by two jihadists on July 26th. Photograph: Charly Triballeau/AFP/Getty Images. 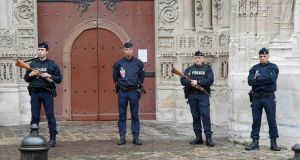 Armed French police take position outside the Cathedral in Rouen, France, during a funeral service in memory of slain French parish priest Father Jacques Hamel at the Cathedral in Rouen, France, August 2nd, 2016. FrJacques Hamel was killed last week in an attack on a church at Saint-Etienne-du-Rouvray near Rouen that was carried out by assailants linked to Islamic State. Photograph: Jacky Naegelen/Reuters 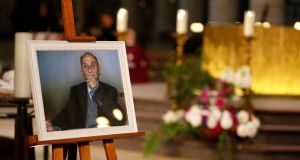 A photo of Fr Jacques Hamel is on display during his funeral mass at the Rouen cathedral, Normandy, Tuesday, August 2nd, 2016. Fr Jacques Hamel was killed by two Islamic extremists last week in the nearby town of Saint-Etienne-du-Rouvray. The Islamic State group claimed responsibility for the attack. Photograph: Charly Triballeau/AP 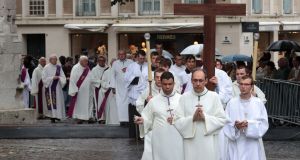 Clerics enter in Rouen’s cathedral on August 2nd, 2016 during the funeral of the priest Jacques Hamel who was killed in a church in Saint-Etienne-du-Rouvray on July 26 during a hostage-taking claimed by Islamic State group. Photograph: AFP

The elderly French priest murdered a week ago tried to push his attackers away with his feet, saying “go away, Satan”, the archbishop of Rouen told his funeral Mass on Tuesday.

Hundreds of priests and bishops filled Rouen cathedral, along with many hundreds more people, including Muslims who have joined in the grieving since the murder of 85-year-old Father Jacques Hamel, who was slashed by his two attackers while celebrating morning Mass at a church in Saint-Etienne-du-Rouvray.

The priest’s murder sent shockwaves that went beyond his work as a small-town parish priest, touching other faiths and all of France. It came less than two weeks after 84 people were killed in a truck attack on a crowd of Bastille Day revellers in Nice.

“Evil is a mystery. It reaches heights of horror that take us out of the human,” Archbishop Dominique Lebrun said during the two-hour Mass.

Roselyne Hamel, the priest’s sister, told the crowd: “Let’s learn to live together, let’s be workers for peace.”

French Interior minister Bernard Cazeneuve, also in charge of faiths, was among those attending the Mass in the cathedral, which dates from the 12th century. Hundreds of people watched the ceremony on a big screen outside, under constant rain.

Archbishop Lebrun, celebrating the Mass, extended thanks to Catholics attending the service, but also to “believers of other religious faiths, in particular the Jewish community and the Muslim community, very affected and already decided to unite for: Never again.”

Archbishop Lebrun invited people to return to churches on August 15th, the day celebrating the Assumption of Mary, to express that “violence will not take over in their hearts”.

On Sunday, dozens of Muslims in France and Italy attended Catholic Masses as a gesture of interfaith solidarity following the attack on the priest.

The Islamic State group claimed responsibility for the attack, in which the priest, two nuns and an elderly couple were held hostage before the assailants slashed the priest’s throat and seriously wounded the other man. Another nun at the Mass slipped away and raised the alarm, and police shot dead both attackers as they left the church.

Tuesday’s ceremony was organised under tight security, and the burial was private.