Moscow claims US and Canadian weapons will only inflame conflict 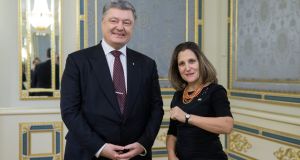 Russia has warned the United States and Canada that they are opening “Pandora’s box” and fuelling conflict by allowing the sale of weapons to Ukraine.

The US state department announced last Friday that the White House had approved provision of deadly “defensive” weapons to Kiev, to help its military contain Russian-led separatists who control a swathe of the Donbas region in eastern Ukraine.

Canada gave permission earlier this month for its arms makers to sell the same class of weapons to Ukraine, where fighting since 2014 has killed more than 10,000 people and displaced 1.6 million.

Several Nato states are already providing military instructors and “non-lethal” equipment to Ukraine - including radar, night-vision goggles and medical kits - but now Kiev hopes to receive weapons such as sniper rifles and high-tech US “Javelin” anti-tank missiles which could boost its army’s effectiveness in the conflict.

“By taking this decision...the US and Canada are opening ‘Pandora’s box’ and essentially getting involved in an internal Ukrainian conflict, again reigniting it and internationalising it,” Russian deputy foreign minister Grigory Karasin said on Tuesday.

“We openly speak to our American partners about our concern over the planned sale of deadly weapons to Ukraine from across the ocean,” he added.

“By doing this, Washington ‘hawks’ are trying, as they see it, to increase the cost to Russia of the war in Donbas. It is completely mistaken and dangerous logic. It will lead to war, not peace.”

Mr Karasin also asked whether the weapons might end up in the hands of terrorists or could be resold illegally “somewhere in the Middle East or some other place on the world map that is painful, above all, for the United States?”

Kurt Volker, the US special representative for Ukraine, has advocated the sale of arms that will help Ukraine defend its territory, and argues that Russia should have no objections if - as it insists - it is not involved in a conflict that has intensified again in recent weeks.

“As it was agreed with (US president Donald Trump) without unnecessary noise, Ukraine is about to receive lethal weapons from the US,” Ukrainian president Petro Poroshenko wrote on Twitter.

“American weapons in the hands of Ukrainian soldiers will not be used for an assault. They are for making the aggressor stop, and protecting Ukrainian troops and civilians. They provide for effective self-defence in compliance with...the UN Charter.”