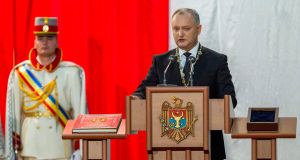 Moldova’s new president, Igor Dodon, taking his oath on the Moldovan constitution during his inauguration ceremony in Chisinau before Christmas. Photograph: Dumitru Doru/EPA

Moldova’s new president, Igor Dodon, has stripped citizenship of his country from the former leader of neighbouring Romania, prompting criticism he is determined to boost ties with Russia at the expense of European Union integration.

Mr Dodon said that Traian Basescu – who was a pro-EU Romanian president from 2004-2014 – had “repeatedly spoken in favour of liquidating Moldova’s statehood through annexation by Romania”.

“While he was president of Romania, he refused to recognise Moldova’s statehood and the existence of the Moldovan people,” making him ineligible for citizenship of the ex-Soviet republic, Mr Dodon added.

“Maia Sandu proposes a Moldova that would claim for itself European values, while Dodon proposes a road to Moscow that implies an oligarchic type of governance. I, as a citizen of Moldova, want European values for this country,” he said after voting in Romania’s capital, Bucharest.

Mr Basescu has said that during his time in power, some 500,000 Moldovans received Romanian citizenship and he has often spoken in favour of unification between the two countries.

The territory of present-day Moldova was part of the Russian empire in the 19th century. Most of it joined Romania in 1918, before being seized by the Soviet Union during the second World War.

The Kremlin controlled Moldova until its empire collapsed again in 1991, when the Russian-speaking Transdniestria region fought against pro-independence forces and broke from government rule.

The tiny province still runs its own affairs with support from Moscow and is deeply hostile to the influence of Romania, with which most of Moldova shares a language and other strong cultural ties.

Ms Sandu sharply criticised Mr Dodon for his first moves since taking power last month – removing the EU flag from the presidential office, changing the language option on the presidential website from “Romanian” to “Moldovan” (even though they are almost identical), and now stripping Mr Basescu of his citizenship.

“These are the matters of ‘urgency’ that will preoccupy Dodon in the coming years. Depending, of course, on what orders he receives,” she said, hinting at his close ties to Russia.

Mr Basescu said Mr Dodon’s decision showed that he “wanted Moldova to remain on its knees before the hegemony of Moscow”.