Demonstrators vow to disrupt transport network unless demands are met 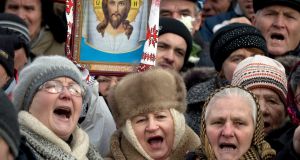 More than 15,000 anti-government protesters marched through Moldova’s capital on Sunday, and vowed to pile more pressure on a controversial new cabinet that is allegedly controlled by the country’s richest tycoon.

The government took power in a hurried debate and vote last Wednesday and, after protesters angry at those events briefly seized parliament that evening, the cabinet was sworn in secretly by president Nicolae Timofti at around midnight.

Critics from across Moldova’s political spectrum say the corruption-riddled country’s fragile democracy has been deeply undermined by what they call a power grab by Vladimir Plahotniuc, a billionaire oligarch and politician.

Mr Timofti refused calls by the parliamentary majority to nominate Mr Plahotniuc as prime minister due to doubts about his integrity, but agreed to accept one of his close allies, Pavel Filip, who became premier on Wednesday.

The move unified pro-European Union and pro-Russian political forces in Moldova around demands for snap elections, and the resignation of a government that they claim will be run from behind the scenes by Mr Plahotniuc.

Thousands of people waving Moldovan flags and chanting “Down with the mafia!” gathered outside government headquarters on a day of sunshine and snow, braving temperatures of minus 10 degrees.

Led by Andrei Nastase of pro-EU movement Dignity and Truth and pro-Moscow politicians Igor Dodon and Renato Usatii, the crowd then marched to other state buildings and stopped on a major road leading into the capital, Chisinau.

“If in the course of the next three days, they don’t accept our demands, then we will block other national roads. We could possibly block four or five roads and the railway and airport,” Mr Dodon told the cheering crowd through a bullhorn.

Mr Filip became Moldova’s fourth premier in 12 months, as the country of 3.5 million people continued to fight fallout from the discovery last year that some $1 billion (€930 million) had been stolen from three of the country’s banks.

Moldovans suspect a major cover-up in the case, with few people currently facing charges and none of the money having been recovered.

Plugging the hole in Moldova’s finances – equivalent to some 15 per cent of gross domestic product – triggered inflation, drove up prices and piled more pressure on struggling people who feel little but contempt for the political elite.

“The protest is not ‘for Russia’ or ‘for Europe’. It’s a protest against corruption, against this ‘pseudo-government’ that has seized state institutions and is indifferent to the bank theft and the poverty of the people,” said Maia Sandu, a former education minister who has formed her own political movement.

“We want to build a democratic state. But that’s only possible on the basis of European values,” she added, at the protest in central Chisinau.

Mr Nastase, a prominent lawyer, said the unlikely partnership between his pro-EU Dignity and Truth movement and pro-Kremlin groups only encompassed a common demand for the government’s resignation and snap elections.

“I won’t have anything to do with Plahotniuc,” Mr Nastase vowed.

“I will put him in jail, and get back the missing billion.”

Mr Plahotniuc and his allies reject the allegations made against him, and deny that he will pull the strings of the new government.

Mr Filip insists that his cabinet will try to find the stolen money and punish the guilty, while reinvigorating Moldova’s drive for EU integration.

“Moldova is in a trap,” Ms Sandu told The Irish Times.

“On one hand we have a government and parliamentary majority which call themselves pro-European, but they have no intention of actually implementing pro-European reforms,” she explained.

“The methods used to form the coalition and appoint the government are very far from what a pro-European government would do. They have compromised the EU integration agenda. But on the other hand there are no other strong alternatives for the pro-EU agenda in the country.”

Given the corruption and chaos that have dogged successive supposedly pro-European governments in Moldova, some people have lost faith in the push for integration with the West, and look for support to Soviet-era master Moscow.

“Some go to Russia to work, others to the EU,” said Dima, a technology student attending the protest with friends.

“We want to stay here, in our homeland. But if these protests change nothing, and our life and economy don’t improve, then we’ll have to go abroad, too.”