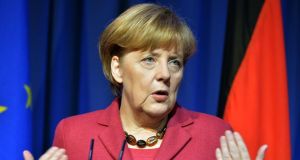 Angela Merkel: made a specific reference to Ireland

Ireland’s reputation as the poster boy for European reform resurfaced yesterday, as EU leaders mulled over the latest development in the Greek bailout crisis. Following a three-hour meeting on the margins of the EU summit late on Thursday night, Greek prime minister Alexis Tsipras agreed to present a fresh list of reforms to creditors “within days” in a bid to unlock more than €7 billion worth of funding due to Greece under its existing bailout programme.

Yesterday, German chancellor Angela Merkel made a specific reference to Ireland, noting the Government put forward its own reform proposals as alternatives to the demands of the EU-IMF troika during the Irish bailout. Such a model shows how countries can claim “ownership” of reforms demanded under a programme, the chancellor said.

While Merkel indicated yesterday that the intricacies of reform proposals will not feature in her discussions with Tsipras in Berlin on Monday, she will want to know that Greek officials are offering specific proposals in their backroom discussions with officials from the institutions.

hancellor said yesterday that Greece must adhere to “every paragraph” of the February 20th agreement on extending the Greek bailout, she said equivalent reforms would also be considered, along the lines of the Irish model.

There was also a sign of further leeway from Brussels, with European Commission president Jean-Claude Juncker indicating in his post-summit press conference that up to €2 billion in EU budget funds could be available to Greece.

Overall, the decision by European Council president Donald Tusk to hold a breakout meeting on Greece during the two-day summit appears to have been the right one. Greek stock markets rebounded yesterday and bond yields fell as investors welcomed the developments.

The “mini-summit” also represented a small political victory for the Greek prime minister, who had been pushing EU leaders to move the Greek discussion to the level of political leaders. The image of Tsipras facing his seven EU counterparts – some would say adversaries – across the table in a room in the European Council building in Brussels is likely to play well in Greece.

which officials described as “constructive” as well as frank, has succeeded in calming the situation which had becoming increasingly tense over the last week with Athens and Berlin engaging in strong rhetoric.

Nonetheless, Greece’s precarious financial status remains a source of concern. According to EU sources, European Central Bank president Mario Draghi told Tsipras during Thursday night’s meeting that the treatment of commission and other troika officials was unacceptable, with lenders unable to get a true picture of the state of Greece’s finances.

Tsipras is reported to have told the EU leaders that there was enough funding in place until early April, and that the government had met its payments to the IMF this month. Greece is due to pay the IMF about €1.2 billion this month, and must also roll over about €1.6 billion in T-bills. This is in addition to regular exchequer expenditure such as public sector salaries and pensions.

With the outflow of deposits from Greek banks continuing, Frankfurt will continue to keep a close eye on the Greek banking system in what could be a crucial week for the country.