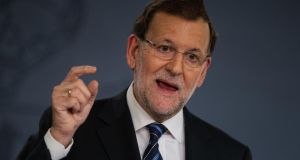 Spanish prime minister Mariano Rajoy has dismissed Sunday’s Catalan independence vote as a failure, vowing to respect the rule of law and refusing to cede ground to separatists in the northeastern region.

The unofficial referendum, organised by the Catalan regional government of Artur Mas, took place despite the staunch opposition of Mr Rajoy, who had successfully asked the constitutional court to announce its suspension. An estimated 2.3 million Catalans ignored the court and voted, representing just over a third of those eligible. With most of those who opposed independence staying away, the result saw 81 per cent vote in favour of secession from Spain.

“We have witnessed a profound failure on the part of the pro-independence process,” the prime minister said yesterday. “According to his own figures, the great majority of Catalans have refused to back this undertaking by Mr Mas.”

Mr Rajoy’s response contrasted with the reaction of Catalan nationalists and many impartial observers, who saw the referendum turnout as a substantial achievement in the light of the central government’s opposition.

There had been speculation that the Catalan and Spanish leaders might open talks aimed at defusing the tension. After the vote, Mr Mas had offered dialogue with the prime minister, albeit with the aim of reaching agreement on a formal independence referendum like that held in Scotland.

But Mr Rajoy made meaningful negotiations look unlikely in the short term as he accused the Catalan premier of bad faith and attempting to blackmail him through initiatives such as Sunday’s vote. “Mr Mas has suggested that we resume a dialogue. I’ve never refused a dialogue with Mr Mas or with anyone,” he said. “Mr Mas wants to impose a proper referendum on me. I can tell you now that this is impossible.”

The only way of achieving a Catalan referendum, Mr Rajoy said, would be by seeking constitutional reform. However, he said his governing Popular Party would veto any such initiative. The prime minister did not offer a specific plan to tackle what has become a deep political crisis, instead promising to focus on consolidating Spain’s incipient economic recovery.

His delay in publicly reacting to the referendum had drawn widespread criticism and the response to his comments yesterday was tepid. “Rajoy has a reactive attitude and he never proposes solutions,” said Miquel Iceta, leader of the Socialists in Catalonia. The Socialist Party has advocated a “third way” alternative that would see the region gain powers in areas such as financing but not full independence.

Meanwhile, the possibility of legal action continues to hang over Mr Mas for having defied the Constitutional Court. The state attorney is deciding whether to pursue the case, which could potentially see the Catalan leader barred from public office.