Ireland’s recent Covid-19 suppression must happen across Europe – WHO 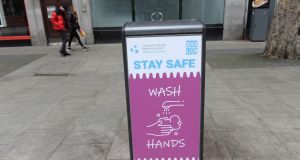 Restrictions in Ireland have successfully reduced the spread of Covid-19, and cases must be kept low to stop dangerous new variants emerging, the World Health Organisation (WHO) has said.

This kind of suppression needs to happen “across the European region”, said Catherine Smallwood, the WHO’s senior emergency officer for Europe, amid warnings that allowing infections to surge among younger groups once the vulnerable are vaccinated may lead to new vaccine-resistant mutations of the virus.

“The best strategy to mitigate the emergence of variants and to control them is really to suppress the transmission of the virus. Ireland has done that very significantly over the past month or so with some quite restrictive measures put in place after Christmas and the New Year,” Ms Smallwood told reporters on Thursday.

“Cases have really come down in Ireland. This needs to happen in all countries across the European region and then we need to sustain these cases as being low,” she said.

“The more we can suppress the transmission of the virus at the European and global level, the less likely it is that new variants will emerge. Also, the fewer cases that are occurring in our communities, the easier it will be to suppress new variants when they emerge – and they will.”

Martin McKee, professor of European public health at the London School of Hygiene and Tropical Medicine who spoke at the WHO press conference, warned that allowing infections to surge among younger groups once older people were vaccinated would “encourage” new variants to emerge.

He warned against “loud and vocal voices” calling for a full opening up.

“There are people who are saying that once we have vaccinated those people who are most at risk of severe illness and dying, that we should open up economies and open up society. What we should be absolutely clear about is that will simply encourage the emergence of new variants,” said Prof McKee.

“The places where the variants have come from have been the places with the high levels of community transmission. We haven’t had a variant emerging from New Zealand, Australia or Vietnam, ” he said.

“It’s absolutely crucial that we get that message across, given that there are quite loud and vocal voices calling for opening up everything because the vaccine will save us.”