Hyper-tourist hub Barcelona at the crossroads

A quarter century after Olympic glory, the Catalan capital counts the cost of success 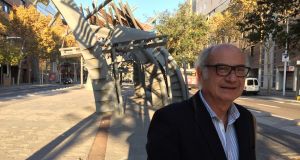 Perched on a hill to the west of the city centre, the Montjuïc Communications Tower overlooks a large esplanade in front of Barcelona’s Olympic Stadium. A coiled spike of white that spirals into the sky, it was designed by star architect Santiago Calatrava for the 1992 Olympic Games.

Down below, to the south, the Mediterranean calmly shimmers and stretching away to the west is the Zona Franca industrial area. From this vantage point, the landmarks that help draw around 17 million tourists to Barcelona each year – the unfinished Sagrada Família church and the Güell park, or the bustling Ramblas promenade – are not visible. But the connection between Barcelona’s hosting of the Olympics and the city’s current status as a hyper-tourist hub is undisputed.

A quarter of a century on from the euphoria of that sporting event, the Catalan capital appears to have reached a kind of reckoning. The influx of tourists to the third most visited city in Europe has become so great that it has sparked fierce debate. Meanwhile, the development that has accompanied this popularity has raised concerns that the home of the eccentric modernist Antoni Gaudí is in danger of losing its identity, of being swallowed up by franchised coffee shops, international fashion retailers and tourist traps.

“We are suffering from our success,” says Ernest Maragall, a leftist politician who worked in Barcelona city hall during the Olympics. “We haven’t been able to manage our success properly.” Maragall’s brother, Pasquall, was mayor of the city at that time and became synonymous with its transformation.

Others are more strident with their criticism of where the city finds itself today.

“It wasn’t the Olympic Games that sent Barcelona to the dogs,” read a headline in the Spanish edition of Vice magazine last year. It continued: “Relax, stop hating the Barcelona Olympic Games so much.”

Many disagree with the notion that the city has suffered some kind of decline, but few would dispute the idea that 1992 was a key moment in Barcelona’s history.

Prior to being awarded the Games in 1986, it was a city blessed with some stunning architecture, but which was still shaking off the greyness of the Franco dictatorship, hampered by a marginalised periphery, a run-down urban centre and petty crime.

Novelist Colm Tóibín, who first visited Barcelona in the 1970s, recalls in his book Homage to Barcelona an atmospheric but grubby place, with “the graffiti in red on the Cathedral walls, the political ferment, the smell of garlic, the faces in a demonstration defiant against the police, the slogans, the sexual freedom and the heat.”

As the Olympics approached, however, Tóibín and others watched as the grime was scrubbed off emblematic buildings and the city underwent a major transformation. Monuments, like the Montjuïc Communications Tower, shot up across the city and the Poble Nou district to the east was chosen as the site of the Olympic Village.

“[The Games] had a real significance in terms of restoring our pride,” says Maragall. “It confirmed that democracy was real and that Barcelona existed. It ‘put Barcelona on the map’, that was the famous expression. We felt recognised by the world and we felt we had to demonstrate that we deserved it.”

Oriol Capdevila is one of many others who describe the 1992 Games as “putting Barcelona on the map”. He was an architect with the firm MBM, which designed the Olympic Village and had a major influence on the city’s transformation.

“We wanted to make it a city that was on a human scale – where people felt comfortable in every way: with their public spaces, with their institutions, with green spaces and above all with the sea,” he says, speaking in the shadow of a huge, ribbed piece of abstract art in Poble Nou which is one of the many legacies of that era.

Deeply proud of the work he was involved in, Capdevila points to the fact that the Olympic infrastructure built then is all in use today.

“Olympic Games have always left architectural corpses behind them,” he says. “In Barcelona’s case that hasn’t happened, because we built thinking about the city and not just the Olympic event.”

The exposure linked to the sports event cemented Barcelona’s status as a tourist destination, a status that would balloon with the advent of cheap air travel. Tourists were drawn to the markets, cafés and beaches, as well as cultural draws like the Sagrada Família and the Picasso Museum. But others, particularly younger visitors, started seeing it as an ideal place for a cheap weekend, or even for a stag or hen night. They would tend to seek accommodation close to the central Ramblas boulevard or beaches and spend much of their time in the bars nearby.

“Barcelona went through this process [of becoming a tourist hub]]much faster than other cities, so its ability to incorporate that change was limited,” says Agustí Colom i Cabau, head of tourism in Barcelona city hall. “That very same success was what caused the problems regarding mass tourism.”

Huge cruise liners have become a common sight in Barcelona’s port and low-cost accommodation has become particularly in-demand. Colom i Cabau says that when the current administration took charge of the city hall, in the spring of 2015, 15,000 new hotel rooms had been planned to open for the next year.

But by then a civic backlash had begun. In the summer of 2014, locals staged a series of protests in the Barceloneta neighbourhood at the increasing number of noisy, alcohol-fuelled holidaymakers in the area. One incident, when three young Italian holidaymakers wandered naked into a local supermarket apparently after a night of partying, caused particular outrage. Since then, anti-tourist graffiti has started appearing in the city and last summer activists went further, systematically vandalising tourist bikes and on one occasion stopping a tourist bus in the street and spraying “Tourism kills neighbourhoods” on the windscreen.

Having campaigned on a platform to rein in Barcelona’s tourism, mayor Ada Colau has attempted to clamp down on illegal holiday apartments and on taking up the post she froze the construction of new hotels.

But Ton Salvadó, head of urban planning in Barcelona city hall, believes the numbers of arrivals are not the only challenge.

“The excess number of tourists has another undesired effect, a more recent one, which is that of gentrification,” he says. “Because it becomes a fashionable city, people want to go to Barcelona and they tend to have more money than the locals and that has caused a price bubble, so locals can’t afford to pay prices and housing rentals.”

Gentrification has also been accelerated by the expiration, three years ago, of a law artificially capping rents for small businesses. Subsequently, rents have soared and even more big, international names have moved in to the central Gothic district.

Nowhere are they more visible than at the top of the Ramblas, where a Burger King sits two doors down from fashion retailer H&M and a stone’s throw away from two Starbucks cafes and a Nike shop. Also nearby is an old-fashioned musical instrument store, a remnant of another era, which has been converted into a tourist information bureau. The many kiosks dotted along the Ramblas boulevard sell products such as cuddly toys, Lionel Messi coffee mugs and posters with slogans such as: “Keep calm and drink beer” or “Life is good at the beach”.

Such sights are only visible in certain parts of the city, but they happen to be the most well-known ones for visitors. Urban planning expert Francesc Muñoz has described them as being part of a process he calls “urbanalization”. “How can tourists have a good time on the Ramblas?” he asked recently. “It’s because people no longer seek authenticity.”

But the current city hall administration appears to be acutely aware of how Barcelona’s Olympic success has created a dilemma that pits “authenticity” against economic interests. As well as taking some firm action to stem the tide, Colau, a leftist former anti-eviction activist, has made social housing a priority, as well as opening up public spaces and creating more space for cyclists.

Broadly speaking, such policies appear to have succeeded, helping make Barcelona, away from its hectic tourist hotspots, a progressive and pleasant city. Inevitably, though, not everyone is happy. “Everyday life [in Barcelona] is more and more uncomfortable, unless you’re a squatter or you ride a bike,” noted conservative politician Josep Miró i Ardèvol recently.

But 25 years on from its landmark Olympics, Barcelona has been thrown into the headlines for other, very different reasons. In August, a terrorist killed 13 people by driving down the Ramblas in a murderous rampage.

Then in the autumn, half a decade of tensions between Madrid and Catalonia came to a head as the region attempted – and failed – to break away from the rest of Spain. As a young prince, King Felipe had paraded around Barcelona’s Olympic stadium holding a Spanish flag during the 1992 Games’s opening ceremony. But this October, as he sternly berated the Catalan government in a live television broadcast, the national unity and Olympic spirit of a quarter century ago felt very far off indeed.

The unrest and uncertainty that accompanied the recent independence drive caused an estimated 3,000 companies to move their legal base out of the region, undermining Barcelona’s status as a business-friendly hub. Many observers also believe the instability ensured the city missed out on being chosen as the new headquarters of the European Medicines Agency, which went to Amsterdam in November.

The city remains in political tumoil, with the regional elections on December 21st throwing up another separatist majority, but no clear path ahead in the region’s standoff with the Spanish government. Whatever happens, Ernest Maragall, whose grandfather was one of Catalonia’s most revered poets, insists his city’s essence will always shine through the turmoil that surrounds it.