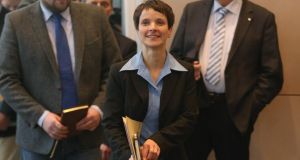 Frauke Petry, chairwoman of the Saxony branch of the AfD, speaking to the media at the Saxony state parliament in Dresden yesterday. Photograph: Sean Gallup/Getty Images

Moving quickly to capitalise on the Paris attacks, AfD and Pegida leaders said the mass shooting showed that concerns about Islam did not amount to racism. But mainstream German politicians dubbed “disgusting” what they viewed as an attempt to put Muslims under “general suspicion”.

The prospect of an alliance between AfD and Pegida comes as a new study shows 57 per cent of Germans see Islam as a threat, up four points in two years. AfD’s Saxony leader Frauke Petry held talks on Wednesday evening in Dresden with leaders of Pegida.

An acronym for “Patriotic Europeans against the Islamisation of the Occident”, its Monday evening marches have mushroomed to attract about 18,000 participants weekly. Leaders have used the demonstrations to rail against violent Islam and demanded tighter immigration and asylum rules.

Petry went ahead with the Pegida meeting on Wednesday though other AfD leaders have opposed any alliance. On Thursday morning, Petry told journalists the AfD and Pegida had agreed to explore a co-operation given “considerable overlap” in priorities. However, she insisted it would not be a formal alliance in Saxony. “This is not what Pegida wants,” she said, saying it wanted to remain a civil society group.

Pegida spokeswoman Kathrin Oertel agreed with this approach and said her group saw common ground with the AfD, particularly on the need for updated immigration law and greater direct democracy. “We are in agreement that there is considerable backlog in the issues of inner security,” she said. Pegida would continue talks with the AfD, said Oertel, adding that she would “welcome if other democratic parties would follow suit”.

But the Paris attacks and the growth of Pegida have catalysed a power struggle. Lucke, an MEP, is determined to squeeze out his three co-leaders while they are determined to dump him and push the party to the right and, according to a leaked memo, open the AfD to “people who fear being swamped by Islam”.

Under Petry, the AfD won nearly 10 per cent on its first Saxon outing, moving into the Dresden state parliament and ejecting the liberal Free Democrat and the neo-Nazi NPD. For Petry, the Paris attacks showed Islamists were “incompatible with democracy”, while Alexander Gauland, head of the AfD in Brandenburg’s state parliament, said the Charlie Hebdo attacks gave Pegida’s demands “topicality and weight”. “All those who ignored or laughed off people’s concerns about the growing danger of Islamism are punished by this bloody deed,” said Gauland. Those remarks were attacked by Germany’s federal justice minister Heiko Maas as a “disgusting attempt to instrumentalise the attack . . . and split society”.

Federal interior minister Thomas de Maizière argued that “in these days it is urgent to distinguish between . . . Islamist terrorism as something very different to Islam”. Chancellor Angela Merkel said the “relationship between Muslims and non-Muslims in Germany . . . is generally very good”.