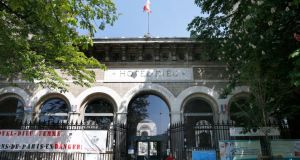 An Algerian student of computer science has been arrested for plotting to attack one or two churches in Villejuif outside Paris, French authorities said on Wednesday. He is also believed to have murdered a young French woman, Aurélie Châtelain.

The suspect was identified as Sid-Ahmed Ghlam (24). Paris prosecutor François Mollins said police found documents that linked him to al-Qaeda and Islamic State and indicated that he was planning an attack with a man believed to be in Syria.

Mr Ghlam was arrested and hospitalised on Sunday, after he apparently shot himself in the leg and called emergency services. He told ambulance workers he had been attacked, but they were suspicious and called police. They followed a trail of blood to Mr Ghlam’s car, which contained several guns and a bullet-proof vest.

Interior minister Bernard Cazeneuve said Mr Ghlam had attempted to travel to Syria and was known to intelligence services.

“Detailed documents that were also found established beyond doubt that the individual was planning an imminent attack, probably on one or two churches,” Mr Cazeneuve said.

Ms Châtelain (33) was an unemployed fitness teacher and mother of a five-year-old daughter. She had driven to Paris for a week-long training session. Police believe Mr Ghlam may have attempted to steal her car.

President François Hollande said the attack on a church “was in the course of being perpetrated”. Alluding to jihadist attacks that claimed the lives of 17 people in January, Mr Hollande added: “We are still under the threat of terrorism.”

The national assembly will vote on May 5th on a controversial law on intelligence services, drawn up in the wake of the January attacks.

“We must improve our intelligence capacities, in practice and in law,” the president said. He has also asked the constitutional council to determine if it threatens civil liberties.

Mr Ghlam figured on a French intelligence list and reportedly travelled to Turkey last year, but was not arrested on his return.

Mr Valls said returning jihadists were “one of the greatest threats we must deal with”. He estimated that by the end of this year there will be 10,000 Europeans fighting on the side of Islamic State in Syria.

Mr Ghlam joined his family in France in 2009. He went to Saint-Dizier in Haute-Marne to see them on weekends. Police searched a house in Vert-Bois on Wednesdaywhere they arrested a young woman who may be his companion. Neighbours said she had two small children and converted to Islam five years ago.