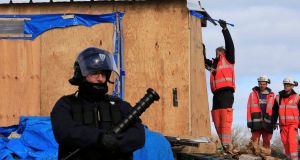 A French riot policeman secures the area as workmen destroy a makeshift shelter during the partial dismantlement of the camp for migrants called the “jungle”, in Calais, northern France. Photograph: Pascal Rossignol/Reuters

Work began on Monday to clear a shanty town outside Calais used by migrants trying to reach Britain after the French government won a legal battle to dismantle part of the camp.

One person was arrested for trying to prevent the clearing of the site - where about 3,000 people are staying - by about 20 workers under heavy police protection.

Regional Prefect Fabienne Buccio said the police presence was needed because “extremists” could try to intimidate migrants into turning down housing offers or buses to reception centres.

Interior Minister Bernard Cazeneuve said last week that authorities would work with humanitarian organisations to relocate the migrants to a nearby park of converted shipping containers or other reception centres around France.

On Thursday a judge upheld a government order to evict migrants living in the southern part of the camp, although a few makeshift buildings of social importance such as a school and a theatre are to remain untouched.

Thousands of migrants fleeing war and poverty, from Afghanistan to Syria, have converged on the northern port over the past year.

Most attempt to climb illegally onto trains using the Channel Tunnel or lorries heading to Britain where they hope to settle.

Their presence has led to tension with some of the local population and to a permanent police deployment.