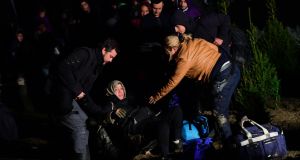 A group of migrants cross the border before Hungarian soldiers closed the border between Hungary and Croatia in Zakany on October 16, 2015. Photograph: Attila Kisbenedek/AFP/Getty Images

The first bus full of migrants has arrived at a Slovenian border crossing with Croatia on Saturday, the Slovenian police said, after Hungary shut its border with Croatia late on Friday, diverting them towards Slovenia.

“The bus is on the border crossing (Gruskovje) and the migrants will now go through a registration process,” police spokesman Bojan Kitel told Reuters. He was unable to say how many people were on the bus.

Slovenia has cancelled all rail traffic from Croatia so that migrants are not able to enter the country by train.

Meanwhile, four people, a woman and three children, drowned and one child was missing after their rubber boat capsized off a Greek island late on Friday, the Greek coast guard said.

The coast guard said it has rescued 13 people and was searching for the missing child after the boat capsized off the Aegean island of Kalymnos.

Thousands of refugees - mostly fleeing war-torn Syria, Afghanistan and Iraq - attempt daily to cross the Aegean Sea from nearby Turkey, a short but perilous trip by inflatable boats, often in rough seas.

Almost 400,000 people have arrived in Greece this year, according to the UN refugee agency UNHCR, overwhelming the cash-strapped nation’s ability to cope.

On Thursday, seven people, among them a baby and three children drowned after their wooden boat and a coast guard vessel crashed during a migrant rescue operation off the island of Lesbos.