Comments from Toto Riina, in jail since 1993, reportedly made in tapped conversations 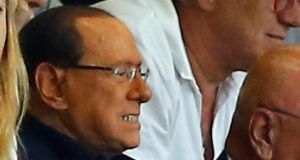 The Italian mafia’s former “boss of bosses”, Toto Riina, in prison since 1993, has claimed ex-prime minister Silvio Berlusconi paid protection money to the Sicilian mafia for a period between the ‘70s and early ‘90s.

Riina reportedly made his comments whilst talking to another mafioso, Alberto Lorusso, at Milan’s Opera Prison.

Riina’s conversations as he was taking his hour of air in the prison yard were tapped by investigators for a period between August and November of last year.

Speaking of the media tycoon, 83-year-old Riina suggests that Mr Berlusconi was concerned about both his own safety in the face of widespread kidnapping in the ‘70s and also about attacks on supermarkets and TV transmitters owned by him in Sicily:

“He came to us, he sent down a guy who made an agreement and who sent us money, piece by piece...He paid us 250 million lire (approximately €125,000 ) every six months...Berlusconi wasn’t so famous in those days, otherwise I would have gone looking for him...”

Essentially, the wire tap “evidence” from Godfather Riina would seem to uphold the sentencing of Palermo magistrates who last May confirmed a seven-year sentence for Mafia collusion against former MEP, Marcello Dell’Utri, a long-time close business and political ally of Mr Berlusconi.

In an appeals hearing in September 2013, a Palermo court confirmed that via Senator Dell’Utri, Mr Berlusconi in 1972 had met with senior Cosa Nostra figures, Stefano Bontate and Gaetano Cina.

That meeting “formed the genesis of the relationship that linked the businessman (Mr Berlusconi) and the mafia”, the court ruling concluded, alleging that Mr. Berlusconi paid huge sums of money in return for Mafia protection and business promotion.

Mr Berlusconi has long been criticised for his relationship with convicted mafia murderer Vittorio Mangano, the infamous “groom” who acted as a bodyguard at Mr Berlusconi’s Arcore residence near Milan in the ‘70s, again thanks to the intervention of Senator Dell’Utri.

Mr Berlusconi, however, has repeatedly defended the late Mr Mangano, calling him a “decent”, “affable” person who used to drive his children to school.

Riina’s conversations with his prison mate did not concern only Mr Berlusconi. On another occasion, he bitterly criticised priest, Don Luigi Ciotti, whose “Libera” movement has campaigned against organised crime for the last 20 years. At one point, Riina appears to call for the assassination of Don Ciotti.

Those remarks prompted nationwide expressions of solidarity for Don Ciotti from many figures in public life including prime minister Matteo Renzi and the speakers of both houses of parliament.

Lower House speaker, Laura Boldrini, said that Riina’s words were “worrying but not surprising”. Responding to the threats, Don Ciotti today said that he feared “nothing” because Riina’s threats were directed not just at him, “a small and frail man”, but also at all those who had campaigned alongside him in Libera.

In his prison yard conversations, Riina also boasted that he was still a rich man and that his “interests” were being looked after for him by another Godfather, Messina Denaro, arguably Italy’s currently most wanted mafioso.

Finally, Riina also claimed that he was the mastermind behind the 1992 killings of Mafia investigators, Giovanni Falcone and Paolo Borsellino.

In particular, he seemed especially pleased with the manner in which Public Prosecutor Borsellino was killed, having been blown up in an explosion that was detonated when he rang the door bell of his mother’s apartment one July Sunday in 1992.

Placing the detonator inside the apartment door bell was a “stroke of genius”, commented Riina, “it was too good...”

Riina is currently serving concurrent life sentences for the murders of both investigators Falcone and Borsellino as well for more than 30 other assassinations carried out from the late ‘60s through to the early’90s.