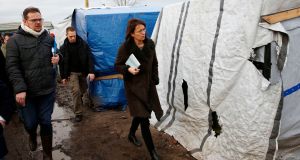 The prospect of bulldozers razing tents in the mud of the Calais “jungle” in front of distressed migrants receded yesterday when a tribunal in Lille postponed a decision on a prefect’s expulsion order.

The southern part of the encampment was supposed to have been evacuated by yonight.

The shanty town, which is home to up to 3,500 people, was supposed to have been destroyed tomorrow.  But the administrative tribunal in Lille said it would not hand down its decision until tomorrow or Thursday, following a visit by judge Valérie Quemener to the site.

The camp could still be dismantled, as the Sangatte camp was in 2002.  An Afghan camp was cleared in 2009.

The present “jungle” took form a year ago when the government ordered migrants out of central Calais.

“Chasing people away will not make them disappear,” Eric Fassin, a sociologist at the University of Paris who specialises in migration told L’Obs magazine.

“All that will happen is the little they had managed to build – schools, churches, etc – will be lost.”

The Belgians fear migrants expelled from Calais could flock to Zebrugge.  Smaller “jungles” have grown up in every port along the Channel coast.

“I am preoccupied by the present situation of children and the absence of visibility concerning their future,” she wrote.

Migrant solidarity organisation France Terre d’Asile says one quarter of the 326 unaccompanied minors in Calais are under 15 and the youngest is 7.

Interior minister Bernard Cazeneuve said he hopes that “with time, the southern zone, which is all mud and desperation, will have disappeared”.

The government is criticised by local officials for failing to remove the migrants, while humanitarian and left-wing groups condemn plans to relocate them as inhumane.

Above all, the migrants want to preserve their chances of reaching Britain.

“When I see Hollywood stars preaching to us, and [London mayor] Boris Johnson advocating Brexit, I say let him get on his bicycle and come to Calais,” Xavier Bertrand, the president of the region, told France Inter radio.

“If England leaves [Europe], the border will be in Dover.”