Euro 2016: France ramps up security ahead of championship 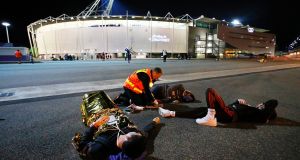 In the wake of jihadist attacks that killed 148 people in France last year, and in the run-up to the Euro 2016 football championship that will bring more than a million visitors to the country, the French interior minister has announced a “new doctrine for intervention in the event of mass killings”.

No place in France will be more than 20 minutes away from an anti-terrorist unit, with the creation of seven new branches of the GIGN and Raid commando forces, minister Bernard Cazeneuve announced.

Mr Cazeneuve wants to end the turf wars that broke out after last year’s attacks.

“This is not a time for competition, but for unity,” Mr Cazeneuve told commandos fanned out before him in the courtyard of the interior ministry yesterday.

France’s three main anti-terrorist forces are the GIGN, which falls under the para-military gendarmerie; the police’s Raid units; and and the BRI, which answers to the Paris prefect.

In the event of an “absolute emergency,” territorial “borders” between the three forces will be discarded.

Whichever group is closest to an attack will move in first.

“The terrorists claim the most victims in the first minutes of a mass killing,” Mr Cazeneuve said.

“So we must react as quickly as possible, just as we must constantly anticipate the possibility of such an attack.”

In the event of an attack, there will be “a sole and unique chief of intervention forces” and a single coordinator, he said.

The three jihadists who blew themselves up outside the Stade de France were not able to enter the stadium.

Thanks to draconian security measures, experts say that inside stadiums may be one of the safest places during Euro 2016.

Eighty thousand people are expected to attend the opening match between France and Romania at the Stade de France on June 10th.

A “pre-filter” system will require football fans to open bags and coats before they reach ticket windows and metal detectors.

That has been raised to 575, including a Raid unit, police snipers on the roof and 20 cameras monitoring the flow of spectators. Some 1,200 private security guards will be on duty inside.

The interior ministry has budgeted €2 million for securing “fan zones” in host cities, enclosed zones that will be swept for explosives before each match.

Fans will be body searched and pass through metal detectors.

Anti-terrorist forces will also protect 24 camps for the football teams.

France is organising 75 war game-style exercises, almost all before Euro 2016. Every host city is required to rehearse their security and medical response to a nuclear, chemical or biological attack.

Two and a half million tickets have been sold for 51 matches in 10 cities: Bordeaux, Lens, Lille, Lyon, Marseille, Nice, Paris, Saint-Denis, Saint-Etienne and Toulouse.

Scenarios for the anti-terrorist exercises, such as Mr Cazeneuve’s repeated use of the words “in the event of mass killings,” are chilling because they reflect the fears of the French government.

“The authorities must always prepare for the worst,” Mr Cazeneuve said.

In the first, last month, security forces evacuated the Gare Saint-Jean after the discovery of a (fake) booby-trapped package, stopped clashes in front of the station, and apprehended “terrorists” on a TGV train.

In a second exercise, in Bordeaux earlier this month, three “jihadists” attacked people queuing to watch a match on a giant screen in the place des Quinconces.

One pretended to blow himself up while the other two took hostages in a building.

The Republic of Ireland’s first game of Euro 2016 is at the Stade de France against Sweden on June 13th.

The then play Belgium in Bordeaux on June 18th and Italy in Lille on June 22nd.

Northern Ireland will also play in Paris, taking on Germany in their last group match on June 21st at Parc des Princes.

Before that they play Poland in Nice on June 12th and the Ukraine in Lyon on June 16th.

In Nice, 200 people participated in a fake attack on the Allianz-Riviera stadium, during which a drone dispersed (harmless) chemicals on the crowd. Decontamination showers were tested.

“We are adapting to a new era,” Mr Cazeneuve said. “Never, never has the terrorist threat been as high. But at the same time, the response of the state has never been stronger.”

Mr Cazeneuve both cajoled and chided the anti-terrorist commandos who attended his presentation, praising the “courage, sang-froid and heroism” they demonstrated last year, but making it clear he will tolerate no in-fighting.

Until now, the GIGN could not intervene in Paris. They were reportedly frustrated at having been excluded from the action on the night of November 13th.

The Parisian BRI was not supposed to show up at the printing plant outside Paris where the Kouachi brothers, authors of the Charlie Hebdo massacre, died in January 2015.

And the Raid moved in on the site of two attacks in which the BRI were already handling the situation.

The government has allotted an additional €233 million for security within the country, and €55 million has been spent on new equipment for police and gendarmes.

Local police units, which are meant to be the first on the scene of any attack until commandos arrive, have been equipped with 300 German HK G36 assault rifles.

These are compact, fire 750 rounds a minute and can pierce bullet-proof vests like those worn by the Charlie Hebdo killers.

In keeping with Mr Cazeneuve’s promise that no part of France will be more than 20 minutes away from an anti-terrorist unit, new GIGN bases are being set up in Nantes, Tours, Reims and the overseas territory of Mayotte, in addition to those already present in Dijon, Orange and Toulouse.

New Raid units have been created in Nantes, Reims and Tours.

The number of commandos in the Parisian BRI is being doubled, to more than 200.