The European Council president Donald Tusk has said that the EU is "still open" to the British government reversing its decision on Brexit. Video: Reuters 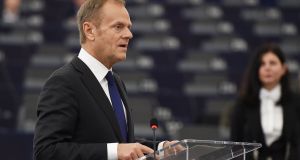 European Council president Donald Tusk speaks during a debate at the European Parliament in Strasbourg, on Tuesday. Photograph: AFP 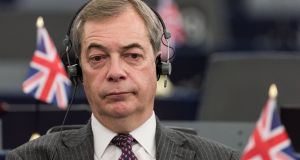 British MEP and former leader of the UK Independence Party (UKIP) Nigel Farage, listens to a speech at the European Parliament. Photograph: EPA

Suggestions in the UK that it should hold a second referendum on Brexit, a proposal with very little real prospect, prompted EU Council president Donald Tusk on Tuesday to welcome any possibility of a change of heart.

But, reporting to the European Parliament in Strasbourg on the December EU summit, Mr Tusk’s real message to the UK was that it needs to move quickly to set out its position on its future relationship with the bloc.

“What we need today is more clarity on the UK’s vision,” Mr Tusk said, warning that “time is limited”. “Once we have that [clarity]the leaders will meet and decide on the way the EU sees its future relationship with the UK as a third country.”

He added that “the hardest work is still ahead of us”.

Unless there is a change of heart among our British friends, #Brexit will become a reality – with all its negative consequences - March next year. We, here on the continent, haven’t had a change of heart. Our hearts are still open for you.

However, teasing the UK, he said “Wasn’t it [British Brexit secretary David] Davis himself who said: ‘If a democracy cannot change its mind, it ceases to be a democracy’. We, here on the continent, haven’t had a change of heart. Our hearts are still open to you.”

European Commission president Jean-Claude Juncker echoed his sentiment: “[Mr Tusk] said our door still remains open and I hope that will be heard clearly in London.” And several MEPs pressed Mr Tusk to make clear to the UK that it could yet legally revoke its Article 50 decision to leave.

During the debate on Mr Tusk’s report a number of MEPs put down markers about the the EU’s guidelines, currently in preparation, for the next phase of negotiations.

The chair of the parliament’s Brexit team, former Belgian prime minister Guy Verhofstadt, and a member of that team Danuta Hubner, warned that there could be no cherrypicking in any transition deal by the UK – it could not have a special deal for capital markets while ignoring the freedom of movement for internal migrants.

Ms Hubner also sought a role for MEPs in the commission’s planning for any “no deal” scenario.

Veteran German MEP Elmar Brok, who is also part of the parliament team, echoed their argument and insisted that any agreement with the UK could not provide better benefits or access to the single market for a non-member than for a member.

On Wednesday Taoiseach Leo Varadkar will address MEPs, the first leader to take part in a new series of debates on the “Future of Europe”. Bulgarian prime minister Boyko Borisov will also attent the parliament to present the plans of his country’s presidency.