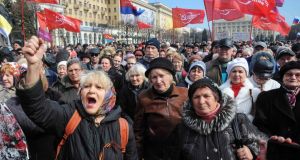 Pro-Russian demonstrators in a rally in Kharkiv on March 30th. Thousands of people have marched through cities like Kharkiv, Donetsk and Luhansk on recent weekends, waving Russian and Soviet flags. Photograph: Reuters

People are proud of their tanks in Kharkiv, Ukraine’s second city. A Soviet T-34 sits outside the local history museum, green armour gleaming, a few miles from the factory where it was designed and built.

The T-34 helped the Red Army turn the tide of the second World War, in a series of immense battles on what are now the rolling borderlands of Russia and Ukraine.

The heroics of the wartime Ukrainian Front have been evoked in the country’s current crisis by allies of former president Viktor Yanukovich, who formed an organisation of the same name to defend eastern regions from “rabid nationalists . . . who come here with plans for occupation”.

The group’s founder, then Kharkiv governor Mikhail Dobkin, had in mind anti-Yanukovich protesters from western provinces, where nationalism and suspicion of Russia are strong and where in the 1940s guerrillas fought alongside the Nazis in a bid to create an independent Ukraine.

The muscle for Dobkin’s Ukrainian Front came from followers of Yevgeny Zhilin, a former police officer whose fight club and businesses are called Oplot. Zhilin took the name, meaning “stronghold” in Russian, from another tank built in the Kharkiv factory where his parents worked.

Like many people in mostly Russian-speaking parts of Ukraine, Zhilin reveres the Soviet Union’s martial glory and craves closer ties with Moscow rather than the West. He sees the West as the driving force of an uprising that ousted Yanukovich and swept EU- backed politicians into power.

Thousands of people have marched through cities like Kharkiv, Donetsk and Luhansk on recent weekends, waving Russian and Soviet flags, chanting support for Yanukovich and Kremlin leader Vladi- mir Putin and asking Moscow to protect them from Ukraine’s pro-western “fascists”.

They don’t have the streets to themselves though: they are heckled by people who back Ukraine’s new government, who are glad that Yanukovich and his clique have gone and hope their country will finally tackle its massive corruption and move towards the EU.


Street corner exchange
One recent Sunday, two middle-aged men had the following exchange on a Kharkiv street corner, despite their wives’ best efforts to lead them away. One of the men wore an orange-and-black St George’s ribbon, symbol of Soviet victory over the Nazis and now of the Ukrainian Front.

“So why is your beloved Russia interfering in Ukraine?”

“What’s your problem, do you think the West wasn’t behind what happened in Kiev?”

“You’re a fool – Crimea was always Russia. And didn’t the West steal Kosovo from Serbia?”

“And you want to bring your gangster Yanukovich back!”

“Do you think the people in charge now are clean?”

“Pack your suitcase and go to Russia if you want to live there!”

“I was born here and will die here. Why don’t you go to your fascists in the West?”

Such dialogues of the deaf are common in Ukraine and reveal deep-seated differences over its history and identity.

Many Ukrainians, particularly but not exclusively in the west, see the Soviet era as a time when their language and culture were oppressed and when the Kremlin sent their relatives to the gulag and subjected them to a manmade famine in 1932-33 that they consider genocide.

In Russian-speaking eastern Ukraine, however, there is still great pride in the military and industrial might of the Soviet Union, reminders of which dominate in the region, and many people feel closer to Russia than to a Ukraine that is becoming increasingly alien to them.

Eastern Ukrainians supported Donetsk-born Yanukovich for more than a decade and many still back him and are likely to support Dobkin in May 25th presidential elections.


Orange Revolution
They also remember how the 2004 Orange Revolution brought to power EU-backed leaders who squabbled incessantly and angered the east and Russia with their populist nationalism and denunciations of Ukraine’s Soviet legacy.

The latest uprising is in part another bid to “de-Sovietise” Ukraine. Statues of Vladimir Lenin were toppled along with a Kremlin-backed Yanukovich regime that symbolised Russia’s domination of the country. When activists took aim at Kharkiv’s towering Lenin, however, people rushed to its defence.

“What has Ukraine given us?” asked Alla Mironova, a Kharkiv teacher at a recent march, which began at Lenin’s feet.

“Just wages and pensions going down, revolutions and chaos. In Russia people are better off – it will always be a great country. Let us join Russia or give us more autonomy. Eastern Ukraine has all the industry, but we are paying for the west with its unemployment and protests.”

In the east, the very idea of Ukraine is being picked apart, and Russian hands are at work. But Ukrainian politicians of all stripes must also shoulder blame for failing to stitch together a stronger country during 23 years of independence.