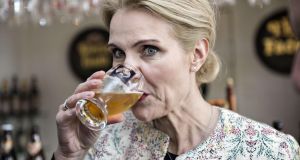 Fluttering red-and-white flags adorned Copenhagen’s Christiansborg – home to the parliament of Borgen television fame – as Denmark celebrated the 100th anniversary of the modern constitution and a century of votes for women.

Four years ago Thorning- Schmidt (48) became Denmark’s female prime minister; now, after a torrid term, she is seeking a second.

This is the tightest Danish election in memory, and the idea that Thorning-Schmidt’s “red” camp could beat the conservative-liberal “blue” opposition on June 18th is something no one predicted six months ago.

Victory for the prime minister would deliver a spark of hope for Europe’s beleaguered social democrats.

Thorning-Schmidt had a chilly start with Danes, many of whom thought her expensive wardrobe was at odds with her centre-left party’s politics. But now many see her as an impressive ambassador for Denmark abroad; think of the selfie with Barack Obama.

She is now almost twice as popular as her party, which has around 25 per cent in polls and leads the main opposition Liberal party. But that centre-right camp could yet oust Thorning-Schmidt from office. Liberal leader Lars Løkke Rasmussen was prime minister from 2009 to 2011, but a legendary temper and spending scandals have tainted his reputation.

The key battleground for all Danish parties is a 10 to 15 per cent floating vote between the two main camps. Making a play for these voters, Thorning- Schmidt launched a campaign on two fronts: talking tough on immigration and flaunting her economic credentials.

Her centrist – some would say liberal – reform drive has won over Denmark’s business leaders. Now she hopes to win over reform-weary voters with a promise of €5 billion in additional social spending.

“Denmark is back on track, we’re out of crisis,” Thorning-Schmidt told voters. “Now it’s about whether Danes want to maintain this direction.

She grew in stature through her handling of last February’s shootings in Copenhagen, earning earned new respect at home and abroad for her sovereign handling of the tragedy.

Around the same time she launched a publicity campaign appearing to take a tougher line on immigration. Her party hopes this will peel away voters from the traditionally anti-immigration Danish People’s Party. Posters went up around Danish cities with a smiling prime minister and statements such as “If you come to Denmark you should Work”.

Thorning-Schmidt has been praised by some Danes for her straight-talking on a longtime taboo issue. Others are uncertain whether she is trying to beat or join the People’s Party on immigration.

Some left-wing Danes see a danger of fanning intolerance towards foreigners, whether eastern Europeans or asylum seekers.

“There are some Danes, not all, who complain about foreigners the way the British complain about the weather. So the more Helle talks about migration, the worse it gets,” said Emma Fleming (38), a midwife who assists in births of refugees and asylum seekers.

Fleming perceives this campaign as part of a wider hardening of Danish debate towards the weakest in society. Still, Social Democrat strategists are confident voters will reward their immigration policy they believe is tough without being heartless.

That is a view shared by many seasoned observers of the Danish political scene. Even they are impressed by Thorning- Schmidt’s comeback.

“Helle has stolen two shiny weapons from her rivals: economic reform from the Liberals, immigration from the People’s Party,” said Annette Juhlers, a news anchor and political adviser. “She’s more confident recently and I see a sparkle in her eye. She’s fighting tough and I think she’s realised that she likes it.”

Back in front of the Christiansborg palace Thorning- Schmidt appears onstage in a red blazer and soon has the crowd cheering and laughing. “She’s the best woman for the job, but she needs socialists around her to keep her on track,” said Helly Dyrby (57) after listening to her speak.

The battle for the Borgen will go down to the wire and could yet turn dirty, but Denmark’s first woman stasminister is playing to win.

“We’re celebrating a centenary of women,” she said, “and we’ve come a long way in 100 years. But there is always room for improvement.”