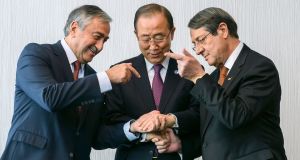 Greek and Turkish Cypriot leaders are engaged in make-or-break UN-brokered talks to reunite the island.

The five days of talks between Nicos Anastasiades and his Turkish counterpart Mustafa Akinci were opened on Monday at Mount Pelerin resort in Switzerland by UN secretary general Ban Ki-moon.

Mr Ban commended the leaders for “significant progress” made during scores of meetings on the island over the past 18 months, but noted that sensitive and difficult issues remain. The talks are “at a critical juncture”, he said.

The island of Cyrus was divided after Turkey occupied the north in 1974 following a Greek junta coup against the government.

The talks, monitored by UN envoy Espen Barth Eide, are focusing on the prickly issue of territory. The Turkish Cypriot breakaway entity recognised only by Ankara comprises 36 per cent of the island and has a population of 220,000. Some 800,000 Greek Cypriots live to the south in the internationally recognised republic, which is a member of the European Union.

Greek Cypriots seek the return to their administration of Varosha, the modern suburb of the Turkish-held medieval city of Famagusta, the UN-controlled buffer zone between the communities and the Morphou area, with the aim of resettling 100,000 Greek Cypriot refugees.

Ankara, the ultimate decider for the Turkish Cypriots, has 30,000-35,000 troops in northern Cyprus and rejects the surrender of Morphou. Athens gives only verbal support to the Greek Cypriots.

EU foreign policy chief Federica Mogherini argues the EU provides the necessary guarantees for both communities, while the Greek Cypriots propose a strengthened UN force operating under the UN Security Council to guarantee the security of both communities.

Under pressure from Turkey, Mr Akinci has set an end-of-year deadline for a deal. He warned that these talks will be the last attempt “by this generation” and says “something else” would be the goal of future efforts. He also said that Turkish president Recep Tayyip Erdogan could annex the north if there is no agreement by the deadline.

A deal will be very difficult to achieve unless there is sufficient progress on territory and other issues in Switzerland to merit the convening of a conference to decide on security, the final phase of the effort. That would be attended by the Cypriot leaders and representatives of Britain, Greece and Turkey – the three parties designated as guarantors of the republic at independence in 1960.

UN envoy Barth Eide said current talks “will not be the end of the road”, while Cyprus government spokesman Nikos Christodoulides insists the talks “will definitely go on”.

A UN plan submitted in separate referendums in 2004 was accepted by Turkish Cypriots but rejected overwhelmingly by Greek Cypriots.