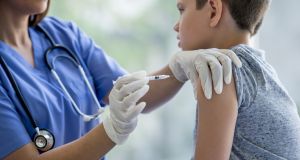 The European Court of Human Rights ruled: ‘The objective has to be that every child is protected against serious diseases, through vaccination or by virtue of herd immunity.’ Photograph: iStock

The European Court of Human Rights (ECHR) has backed rules in the Czech Republic banning unvaccinated children from schools in a judgment that may have broader implications for the debate about mandatory jabs against Covid-19.

Judges decided by a vote of sixteen to one that excluding unvaccinated children was permissible as a “protective” measure for other classmates rather than a “punitive” one against the few not immunised.

“The objective has to be that every child is protected against serious diseases, through vaccination or by virtue of herd immunity,” the Strasbourg, France-based court said on Thursday. “The Czech health policy could, therefore, be said to be consistent with the best interests of the children who were its focus.”

The ruling could become political fodder as societies argue whether vaccination against the coronavirus should be mandated by law, and whether children should receive a vaccine.

Vaccine producers including Pfizer and Moderna are currently doing clinical trials in adolescents, as some doctors argue the pandemic can never fully be brought under control until children are immunised.

Four out of five families in Thursday’s case went to the ECHR after appeals against nursery school bans were rejected by Czech authorities. In the first case, a Czech citizen was fined for refusing to have his two teenage children vaccinated against polio, hepatitis B and tetanus and failed to have those fines overturned in local courts.

The ECHR noted that France, Poland and Slovakia supported the Czech Republic’s more “prescriptive” approach to vaccination. Ultimately, however, it was not the court’s duty to judge whether the Czech policy was overly prescriptive, but whether it broke human rights rules.

It didn’t, the court ruled, and the government’s measures could be regarded as being “necessary in a democratic society.”

Representatives for the Czech health ministry weren’t immediately available to comment on the decision.– Bloomberg