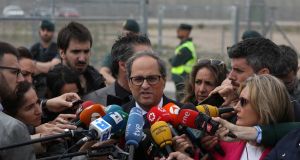 Newly elected Catalan regional leader Quim Torra outside the Estremera prison near Madrid where he visited Jordi Turull, Josep Rull and other pro-independence politicians who are jailed there. Photograph: Sergio Perez/Reuters

The Catalan independence movement is entrenched in a fresh stand-off with Madrid, after the new president of the north-eastern region named several jailed and exiled politicians in his cabinet.

Quim Torra, an outspoken secessionist who took office as Catalan president last week, announced the names of his 13 ministers on Saturday. However, two of his choices, Jordi Turull and Josep Rull, are in prison ahead of their trial for rebellion and other charges related to their alleged involvement in an independence bid last autumn. Two others, Antoni Comín and Lluís Puig, are living in Belgium to avoid facing the Spanish justice system.

The Spanish government had been expected to end its implementation of direct rule in Catalonia this week, but the controversy stirred by Mr Torra’s appointments means it remains in place.

In a statement, the prime minister’s office described the move as a “provocation” and on Monday deputy prime minister Soraya Sáenz de Santamaría said Mr Torra has “begun an absolutely perverse dynamic”. She drew particular attention to the fact that the health ministry, seen as a key portfolio due to recent pressures, had been entrusted to Mr Comín, who is abroad.

The government has said it will not publish the names of the new ministers in the official register until constitutional experts have decided on the legality of the Catalan president’s choices. However, political pressure is already building for Spanish prime minister Mariano Rajoy to keep in place article 155, the constitutional clause which has allowed him to rule the region from Madrid since October.

The stridently unionist Ciudadanos party has called for the measure to be broadened to centralise control of the Catalan police and public broadcaster. And on Monday, socialist leader Pedro Sánchez appeared to harden his stance, comparing the new regional president to French far-right leader Marine Le Pen. “The one prolonging article 155 is Mr Torra,” he said, claiming that there was an institutional vacuum in Catalonia.

But Mr Torra was unrepentant on Monday as he visited Mr Turull, Mr Rull and other pro-independence politicians in Estremera jail, near Madrid.

“Catalonia is waiting for its honest, honourable and democratic politicians, who only did what the people asked them to do,” he said.

He added that Mr Turull and Mr Rull had confirmed their determination to take up their designated posts and that they have asked the supreme court to grant them leave in order to attend their swearing-in ceremonies.

Protests against article 155 were staged in Barcelona, Lleida and other cities across Catalonia on Monday evening.

As he decides how to respond to the latest developments, Mr Rajoy must take into account the 2018 budget. In order to get the bill approved in a parliamentary vote on Wednesday, Mr Rajoy’s Popular Party (PP) will almost certainly require the support of the Basque Nationalist Party (PNV), which has repeatedly warned it will vote against the budget if article 155 is still in place in Catalonia.

Approval of the budget would guarantee a degree of stability for the governing party until the next general election is due, in 2020, while its rejection could trigger a snap vote.