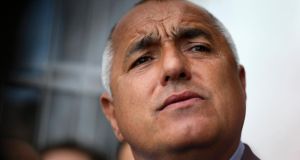 Bulgaria faces political paralysis after a snap election failed to hand a majority to any party and gave a potentially crucial role to far-right radicals.

The result will only deepen the despair and anger of many Bulgarians who endure grinding poverty while a political and business elite thrives in ostentatious style, unhindered by corruption scandals and European Union demands that Sofia do more to fight graft. Allegations of election fraud will add to seething public discontent with Bulgaria’s entire political class.

With almost all votes counted, the centre-right Gerb party, which resigned from government in February, was expected to take about 97 seats in the new parliament, with the Socialists claiming 85. The mostly ethnic-Turkish Movement for Rights and Freedoms (MRF) is likely to occupy about 34 seats and the ultra-nationalist Ataka party 24 places.

Bullying style
The brusque, bullying style of Gerb and former prime minister Boiko Borisov has irked the other parties, however, making them reluctant to form a coalition with a party whose anti-corruption credentials were badly tarnished by recent wiretapping allegations against an ex-minister. The Socialists, MRF and Ataka have ruled out coalition talks with Gerb, although some analysts say Ataka may be willing to negotiate with Mr Borisov’s party if the terms are attractive enough.

Socialist leader Sergei Stanishev, whose party performed better than expected, said he is willing to discuss an alliance with any party except Gerb, and he has proposed the formation of a broad coalition led by a respected and non-partisan former finance minister, Plamen Oresharski.

“Slowly and painfully Bulgaria is getting rid of Gerb and this is a healing process. It is clear that Gerb will not be able to form a government and this is good for Bulgaria,” said Mr Stanishev, who said the Socialists were ready to create a “government with strong expert participation and with a clear programme”.


Crush corruption
Unless the final vote count gives the Socialists and MRF a majority, however, they will have to seek support from Ataka, which gained support in the months before the election as public anger grew.

Ataka promises to raise taxes on the rich, crush corruption and nationalise foreign-owned enterprises, while also regularly lambasting Bulgaria’s large Roma community and the Turkish minority represented by the MRF. Analysts say a coalition between the Socialists, MRF and Ataka would be extremely unstable.

Some predict a resumption of the street protests that forced Mr Borisov’s government to resign, and possibly another snap election this year. Senior Gerb officials say they expect Bulgaria’s president to give them the first chance to form a new government, and the party would almost certainly have to join forces with Ataka to retain power, a prospect that irks many EU states that fear economic hardship is fuelling extremism, and look askance at the rise of far-right parties like Ataka and Jobbik in Hungary.

Eoghan Murphy, the Fine Gael TD who led an election observation mission for the Organisation for Security and Cooperation in Europe, said Bulgaria’s ballot offered “genuine choice in a competitive campaign, and the authorities made real steps to uphold the integrity of the election”.

However, “when you look at the mistrust that exists between political parties, and at the current economic difficulties, this is a negative development,” Mr Murphy added, noting that various scandals had undermined faith in the political system there.