Brazil’s president has haircut instead of meeting French minister 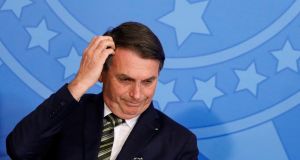 Brazil’s president Jair Bolsonaro: Keeps the part in his hair, like his politics, on the far right. Photograph: Adriano Machado/Reuters

Mr Bolsonaro cancelled an appointment with Mr Le Drian at the last minute on Monday, on the pretext of a busy schedule. Then, at the time of the aborted rendezvous, Mr Bolsonaro posted a live video of himself having his hair cut. In the video, he embarks on a rambling, 12½-minute speech, without mentioning Mr Le Drian.

The Brazilian leader keeps the part in his hair, like his politics, on the far right.

“The president works from 4am until midnight every day. He has to find a few minutes to have his hair cut,” Mr Bolsonaro’s spokesman, Otavio Do Régo Barros, told Brazilian journalists.

As diplomatic incidents go, it was almost as serious as the Ottoman Dey of Algiers touching the French consul with his fly whisk in 1827. That insult precipated a three-year blockade of Algiers, followed by a French invasion and 132 years of occupation.

Mr Bolsonaro made clear what was needling him in an earlier statement on Monday. As quoted by Le Monde, he belittled Mr Le Drian by calling him “the French prime minister, if I’m not mistaken” and said they were to talk about “problems like the environment”. Then Mr Bolsonaro added, “He better show me respect. He has to understand that the Brazilian government has changed. The submissiveness of former heads of state towards the First World is over.”

At the G20 summit in Osaka at the end of June, President Emmanuel Macron made Mr Bolsonaro promise to respect Brazil’s signature of the 2016 Paris climate accord. Brazil committed to saving the Amazon rainforest as part of that agreement.

Satellite images show that since Mr Bolsonaro came to office last January, an estimated 6,352sq km of forest has been destroyed, an 88 per cent rise in the rate of deforestation.

Mr Bolsonaro is a climate change sceptic, and has repeatedly shown indulgence towards companies accused of deforestation. On Tuesday, he called a report on the victims of the 1964-1985 military dictatorship “nonsense”. Brazilian media reported he had dispatched a diplomat to a conference of climate change deniers in Washington.

France has upped the stakes by making it known that until Mr Bolsonaro abides by the climate accord, France will not ratify the EU’s lucrative Mercosur free trade agreement with four South American countries, including Brazil.

Mr Bolsonaro is known as the Trump of the tropics. Not only does he share Donald Trump’s contempt for climate change warriors, he appears to have espoused Mr Trump’s concept of diplomacy.

Mr Trump has made his daughter Ivanka a White House adviser, and placed his son-in-law, Jared Kushner, in charge of Middle East diplomacy. In similar fashion, Mr Bolsonaro is appointing his son Eduardo as ambassador to the US.