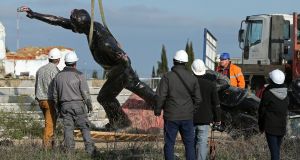 Workmen dismantle the Onesimo Redondo monument in Valladolid in February 2016, in line with a law that decrees the disappearance of all symbols of dictator Franco. Photograph: Cesar Manso/AFP/ Getty Images

The street names of Basque cities are at the centre of a political row over historical memory that has encompassed the Franco dictatorship, a Stalinist firebrand and separatist terrorism.

Last month, the conservative Popular Party (PP), which is in opposition in Bilbao, called on the city hall to make changes to the names of three streets which pay tribute to a trio of divisive Basque historical figures.

One of the streets was named after Sabino Arana, a 19th-century figure who is widely seen as the father of Basque nationalism. However, his extreme views, which presented the people of his region as a superior race, have been mostly discarded by modern Basques. In its proposal, the PP described Arana as racist and said that he had “made possible the existence of phenomena such as the Eta terrorist group”. Eta killed more than 800 people in a four-decade campaign for an independent state.

A street named after Dolores Ibárruri was another of the PP’s targets. Known as “La Pasionaria”, she was a legendary republican figure during the Spanish civil war who went on to become a life-long communist party leader. The PP underscored her “terrible” role in the civil conflict and closeness to Stalin. The third figure is Tomás de Zumalacárregui, a Carlist military leader from the early 19th century.

But following a fierce political backlash, which saw nationalist politician Koldo Mediavilla describe the idea as “a historic disgrace”, the PP withdrew the motion just hours after presenting it, acknowledging it had made a mistake.

Spain approved a historical memory law in 2007, which sought to remove all symbols of the 1939-1975 dictatorship of Francisco Franco. However, the law’s implementation has only been partial and in 2014, the Basque region approved its own statement of intent to restore the memory of victims of Franco’s regime.

On Monday last, the Basque government unveiled the “Columbarium of Dignity” in the town of Elgoibar, the country’s first state-backed resting place for unidentified civilians who died during the civil war or under Franco. Activists say more than 100,000 such victims remain in unmarked graves across Spain. But the Spanish government offers no help in exhuming and identifying them and refuses to co-operate in the investigation of human rights crimes of the Franco era.

While the PP has mostly resisted efforts to tackle the historical memory issue, its controversial Bilbao proposal was a response to the political left’s ongoing campaign for street names and symbols honouring Franco and his officials to be removed.

The debate also rages in other Basque cities such as San Sebastián and Vitoria, where Francoist shields of arms are carved into the local government building and a cathedral. After a bad-tempered debate in the municipal chamber on Monday, Vitoria has decided to “modify or contextualise” Francoist symbols in the city. All parties voted in favour, except the PP, which abstained.

In many cases, the streets in question are not directly linked to Franco himself, but they are named after mayors, bishops and other officials who were appointed under the dictatorship. Some critics of the Basque street-name overhaul warn that it is overly simplistic to identify individuals as pro-Franco simply because they fall into this category.

“If we start analysing a lot of biographies very closely, we’ll end up without any street names at all,” said the PP’s Luis Eguiluz.

In the Basque Country the political dynamic is more complex than in most of the rest of Spain, due to the presence of nationalists – such as the centre-right Basque Nationalist Party (PNV) and the radical leftist Bildu coalition – and Eta terrorism has inevitably featured in the historical memory debate.

In 2011, a court ordered the Bildu-led city hall of San Sebastián to change a street named after Mikel Gardoki, an Eta member who was killed in a shoot-out with police in 1975. Bildu refused to comply and the street name remains.

Meanwhile, the PNV, which governs the Basque Country, is lobbying for the Spanish government to apologise for the German Luftwaffe’s Franco-backed bombing of the town of Gernika during the civil war, with this year marking its 80th anniversary.

The German president, Roman Herzog, apologised in 1997 and the PNV’s Jokin Bildarratz said the Spanish government should do the same, because the attack “has become a global symbol to represent the horrors of war and the use of civilians as a weapon”.