Italy moves to evict more than 500 people from refugee centre 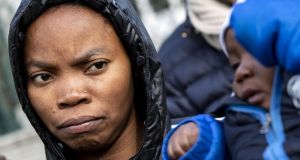 More than 500 people are being ousted from a refugee reception centre in a town close to Rome in the first major eviction since Italy’s rightwing populist government enacted hardline immigration measures into law.

Thirty people were initially evicted from the centre, the second largest of its kind in Italy and the place where, in 2016, Pope Francis washed residents’ feet as part of his Easter ritual, in Castelnuovo di Porto on Tuesday.

A further 75 were removed on Wednesday, with the remaining 430 to be evicted before the centre’s closure on 31 January.

The evictions follow the approval of the “Salvini decree”, named after Matteo Salvini, the interior minister and leader of the far-right Northern League, in late November.

Mr Salvini claimed the centre, which has hosted about 8,000 people over the last eight years, was a den for “drug dealing and crime”, and that the same fate would soon befall the 2,000 people living in the sprawling Cara di Mineo reception centre in the outskirts of Catania in Sicily and at similar structures across Italy.

He said the closures would save the Italian government €6 million a year, money that would, instead, be spent “helping Italians”.

“I did what any good father would have done,” he said.

Riccardo Travaglini, the mayor of Castelnuovo di Porto, told reporters that no notice was given before the evictions.

Men, women and children, manyof whom are enrolled in local schools, were reportedly separated before the majority were taken by bus to undisclosed destinations.

Some were housed by local residents, including Mr Travaglini, who took in a woman from Somalia and her child.

“In a single day, they managed to destroy years of work,” Mr Travaglini said. “These were people who had managed to become integrated.”

Mr Travaglini protested alongside staff working at the centre and local priests, while Rossella Muroni, a politician with the small leftwing party Free and Equal, attempted to block one of the buses.

Parliamentarians with the opposition Democratic party were heavily critical of the move.

The party’s Roberto Morassut compared the evictions to “deportations to Nazi concentration camps”.

“One of the most important structures for immigrant reception was evacuated without adequate warning ... it was a real blitz,” he said.

Mr Salvini has said those who “have rights” will not be left stranded and will instead be relocated to other “beautiful structures”.

“They will have the right to board and lodging,” he said. “But for the rest, we will begin the deportation process.”

The evictions came as Germany announced it was pulling out of the EU’s Operation Sophia, a naval mission targeting human trafficking in the Mediterranean, due to Italy’s refusal to allow migrants to disembark at its ports.

The majority of residents at the Castelnuovo di Porto centre were in the process of applying for asylum.

Many had received humanitarian protection, a two-year permit granted to those who are not eligible for refugee status but who, for various reasons, cannot be sent home.

Humanitarian protection status, which enables people to work and is estimated to be held by about 100,000 people, was abolished under Mr Salvini’s bill.

“Salvini’s decree will only amplify social problems,” said Valeria Carlini, a spokesperson for the Italian Council for Refugees. “The law is forcing those who already have humanitarian protection into the social margins ... instead of having the chance to work, they will end up homeless.”

Unions have also protested over the thousands of jobs that will be lost as a result of the refugee centre closures.

“The reality is that more Italians will be jobless,” said Ms Carlini. “Organisations involved in migrant integration are often accused of being in a ‘lucrative business’. It’s not like that at all, Salvini’s decree will bring many organisations to their knees.” – Guardian