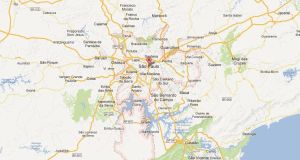 Evidence is mounting that police are behind a wave of death squad-style killings that has left hundreds of people dead in Brazil’s largest city in recent months.

Last weekend two officers were arrested in connection with a string of attacks by death squads in the west of greater São Paulo that left four people dead. They joined more than 20 others already being held for suspected involvement in death squads or for carrying out summary executions while on duty.

Authorities confirmed that two investigations have been opened into the possible involvement of a group of officers in the killing of 35 people by death squads in the greater São Paulo city of Guarulhos, home to Brazil’s main international airport.

The latest arrests prompted São Paulo governor Geraldo Alckmin to promise “zero tolerance” for officers involved in murders, though he denied any knowledge of death squads operating in the state’s police.

But Fernando Grella, São Paulo’s state secretary for security, admitted the possibility of death squads made up of police officers.

The admission is a marked change for the state’s political and police leadership, which had previously denied the existence of such groups – a denial human rights groups say created a sense of impunity within the force.

The most dramatic evidence of likely police involvement was the emergence of security camera footage that showed two poor youths being shot dead last month by two men on a motorbike.

The footage clearly shows that police officers were within 50m of the scene when the killings took place and provided an escort for the killers as they made their escape. Eleven officers are now under arrest in connection with the killing.

The increase in death-squad killings in the city takes place against a background of a war between police and the criminal gang that controls its underworld – the Primeiro Comando da Capital (PCC).

Last year the city saw its first rise in homicides since 2001, up 34.3 per cent to 1,368. The PCC killed over 100 officers in 2012, mostly off duty. This provoked a fierce reaction by police in uniform and a spike in death squad activity in PCC-dominated areas.


In an effort to tackle police violence at the start of the year Mr Grella ended the practice whereby police could register the killing of people as “resistance followed by death”. By claiming people they had shot had been resisting arrest, officers knew the incidents would rarely be investigated, meaning violent officers used the phrase to cover for murder. Now such deaths will be registered as “death following police intervention”.

But specialists warn this and other changes since Mr Grella took command of the state’s security apparatus in November will not be enough on their own to tackle the problem of death squads and police violence.