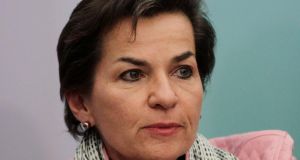 UN climate chief Christiana Figueres who has been anxious to emphasise what countries are already doing, rather than having the media focus on differences, rows and deadlock. Photograph: Reuters

With just over 1,000 participants, including 670 delegates from 176 countries, the UN climate talks here are going surprisingly well – giving hope that real progress can be made in working towards a global agreement in 2015.

“The most surprising thing is that there’s an awful lot of common sense being spoken on a whole range of issues, and it’s getting better as the week goes on,” said Matthew Kennedy, of the Sustainable Energy Authority of Ireland.

There is a relaxed atmosphere at the talks, which are being held in the former West German Bundestag (parliament) on the right bank of the Rhine – built in the late 1980s just prior to German reunification and the move back to Berlin.

“It’s been a reasonably good start,” according to Noel Casserly, assistant principal officer at the Department of the Environment, who heads the Irish delegation. “Parties are engaging constructively. But we will have to step it up.”

He said there were fears that there would be “agenda fights, driven by ‘buyers’ remorse’ over things they had signed up for [at the last UN climate conference] and having regrets about it now, but that hasn’t been evident here in Bonn”.

Mr Casserly said the “physical context of a smaller session and the use of round tables were more conducive to working”.

And while well-known positions were being restated, there was “movement” by both developed and developing countries.

The replacement of Jonathan Pershing as chief US negotiator by diplomat Trigg Talley may also have helped, according to some. Dr Pershing, a walking abacus on climate change, took up a new post in the US department of energy last January.


Early days
However, seasoned participants in the UN process suggested it was too early to say whether there has been a change in the US position on foot of President Barack Obama’s commitment to prioritise climate change during his second term in office.

“We won’t see that until the CoP”, one said, referring to the 19th Conference of the Parties to the UN Framework Convention on Climate Change, which will be held in Warsaw in mid-November.

“That’s when there’ll be a high level of political engagement.”

Sabine Bock, director of Munich-based Women in Europe for a Common Future, said one “very positive” development was Costa Rica’s invitation to developing countries to “look at where they stand” and what they could do to tackle climate change.

UN climate chief Christiana Figueres, who is from Costa Rica, has been anxious to promote a more positive narrative about the whole process, emphasising what countries are already doing, rather than having the media focus on differences, rows and deadlock.

Even next year’s World Economic Forum in the Swiss resort of Davos is to have a “climate focus”. Yesterday was a public holiday in Germany, marking May Day, and delegates were nearly as relaxed as people in Bonn enjoying the day off.


Ethiopian high
The highlight so far, according to John Lanchbery of the Royal Society for the Protection of Birds, was veteran Ethiopian negotiator Tewolde Egziabher’s declaration that his country – one of the world’s poorest – aimed to become “carbon neutral” by 2025.

China’s chief negotiator was in a jocular mood yesterday when he spoke about means of implementation of any climate deal, or “MoI”, as it’s known – capacity building, technology transfer, etc – noting that the word “ moi ” in Cantonese translates as “nothing”.