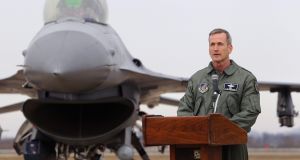 US Lieutenant General Terrence J. O’Shaughnessy, deputy Commander of the US Forces Korea, speaks in front of a US F-16 fighter jet during a press briefing on the flight by a US B-52 Stratofortress over South Korea at Osan Air Base in Pyeongtaek, South Korea on Sunday. Photograph: EPA

The United States deployed a B-52 bomber on a low-level flight over its ally South Korea on Sunday, in a show of force following North Korea’s nuclear test last week.

North Korean leader Kim Jong Un maintained that Wednesday’s test was of a hydrogen bomb and said it was a self-defensive step against a US threat of nuclear war.

North Korea’s fourth nuclear test angered both China, its main ally, and the United States, although the US government and weapons experts doubt the North’s claim that the device was a hydrogen bomb.

The B-52, based in Guam and capable of carrying nuclear weapons, was flanked by two fighter planes, a US F-16 and a South Korean F-15, in a low flight over Osan Air Base, before returning to Guam, the US military said in a statement.

Osan is south of Seoul and roughly 100 km from the North Korean border. The flight was “in response to recent provocative action by North Korea”, the US military said.

“The United States remains steadfast in its commitment to the defense of the Republic of Korea (South Korea) and to maintaining stability on the Korean Peninsula, to include extended deterrence provided by our conventional forces and our nuclear umbrella,” said US Lt. Gen. Terrence O’Shaughnessy.

The United States is also considering sending a nuclear-powered aircraft carrier to waters off the Korean peninsula next month to join a naval exercise with Seoul, South Korea’s Yonhap news agency reported without identifying a source. However, US Forces Korea officials said they had no knowledge of the plan.

Experts believe the North’s nuclear test, which produced a seismic tremor of 5.1, too small to be a proper hydrogen bomb test, was designed to set the stage for a rare general meeting later this year of its ruling Workers’ Party, the first since 1980.

After the North’s last test, in 2013, the United States sent a pair of nuclear-capable B-2 stealth bombers over South Korea. At the time, the North responded by threatening a nuclear attack on the United States.

The two Koreas remain in a technical state of war after their 1950-53 conflict ended in a truce, not a peace treaty, and the United States has about 28,500 troops based in South Korea.

Earlier on Sunday, North Korea’s state news agency KCNA quoted Kim as saying no one had the right to criticise its nuclear tests.

“The DPRK’s H-bomb test ... is a self-defensive step for reliably defending the peace on the Korean Peninsula and the regional security from the danger of nuclear war caused by the US-led imperialists,” it quoted Kim as saying.

The North’s official name is the Democratic People’s Republic of Korea.

“It is the legitimate right of a sovereign state and a fair action that nobody can criticise,” he said.

TKim’s comments were in line with the North’s official rhetoric blaming the United States for deploying nuclear weapons on the Korean peninsula to justify its nuclear programme but were the first by its leader since Wednesday’s blast.

The United States has said it has no nuclear weapons stationed in South Korea.

Kim noted the significance of the timing of the test as being held in the year of the party congress, “which will be a historic turning point in accomplishing the revolutionary cause of Juche,” according to KCNA.

Juche is the North’s home-grown state ideology that combines Marxism and extreme nationalism established by the state founder and the current leader’s grandfather, Kim Il Sung.

KCNA said Kim made the comments on a visit to the country’s Ministry of the People’s Armed Forces.

South Korea continued to conduct high-decibel propaganda broadcasts across the heavily militarised border into the North on Sunday.

The broadcasts, which include “K-pop” music and statements critical of the Kim regime, began on Friday and are considered an insult by Pyongyang. A top North Korean official told a rally on Friday that the broadcasts had pushed the rival Koreas to the “brink of war.”

Daily life was mostly as normal on the South Korean side of the border on Sunday. A popular ice fishing festival near the border attracted an estimated 121,300 people on Saturday and another 100,000 on Sunday, Yonhap reported.