The China Meteorological Administration said Mangkhut, dubbed “King of Storms”, was one of the 10 biggest storms to hit southeast China since 1949 - when records began - with wind speeds at around 162 km/h. 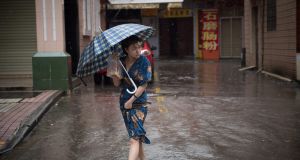 A woman walks in the rain the day after Typhoon Mangkhut hit Yangjiang in China’s Guangdong province on Monday. Photograph: Nicolas Asfouri/AFP/Getty Images

Four people have died in southern China after the world’s most ferocious storm this year, Typhoon Mangkhut, lashed the province of Guangdong, with winds of 230km/h recorded and more than three million people evacuated as the storm made its way from Hong Kong and the Philippines.

Hopes of finding survivors in the rubble of a huge landslide in the Philippines faded on Monday as rescuers in a remote mountainous region struggled to reach dozens of people feared trapped, two days after the typhoon struck.

Mangkhut made landfall at Jiangmen city at about 5pm on Sunday in southern China after wreaking havoc in Hong Kong and Macau.

The storm brought several cities in the Pearl Delta nearly to a standstill and 49,000 fishing boats were called back into port as waves more than three metres high lashed the coastline. The storm was on Monday making its way inland towards Guizhou, Chongqing and Yunnan provinces.

Disaster relief authorities said three people in the provincial capital Guangzhou were killed by falling trees and another person died after being struck by building materials in the city of Dongguan.

In Hong Kong, the typhoon warning was lowered and people started to pick up the pieces, with businesses and offices reopening. There were startling pictures on social media of swaying buildings, collapsed scaffolding, fallen trees and major flooding.

There were power outages throughout the Pearl River Delta. In Shenzhen, just across the border from Hong Kong, 120,000 households were without power for hours.

Hong Kong Observatory said it was the most powerful storm since records began in 1946. Nine hundred flights out of Hong Kong International Airport were cancelled.

In Macau, the casinos were ordered to close for the first time.

In the Philippines, some 300 police, soldiers, firefighters and volunteers armed mostly with hand tools raced to remove rocks, mud, debris and drain water from collapsed buildings, hoping to find some signs of life after 13 bodies were pulled out.

The village of Ucab in the picturesque Cordillera region was hit by one of 50 landslides triggered by heavy rains brought by Mangkhut, which tore across the northern tip of the Philippines early on Saturday, killing at least 54 people.

Only three people had been rescued in Ucab on Monday. Fifty-five were missing, six of them children. Many of the adults were in an abandoned bunkhouse, next to a chapel and home of a pastor and his family. The buildings were all crushed by earth and rocks.

“I am 99 percent sure the people there are dead,” said Victorio Palangdan, the municipal mayor. “We will continue until we get them all.”

Rescuers used bare hands to remove roofing, slabs of concrete and planks of wood, standing side-by-side, passing debris along a line to a pile 15m away. The abandoned bunkhouse, owned by gold miner Benguet Corp , was near the site of a mine which was operating illegally, according to the Chamber of Mines of the Philippines.

The chamber, of which Benguet Corp is a member, said mining operators in Ucab had been repeatedly told to leave the area because of the threat of landslides. Angered by the deaths from landslides that some government officials say are exacerbated by illegal mining, President Rodrigo Duterte on Monday reiterated his desire to “close all mining”.

His environment minister, Roy Cimatu, earlier ordered the stoppage of all small-scale mining in the Cordillera region, where landslides had killed 24 people. “From what I see, this will take time. We are unaware how deep they were buried,” said Peter Negrido, who has been involved in numerous rescue missions during natural disasters.

The typhoon affected about five million Filipinos altogether, 150,000 of whom were in evacuation centres when the storm hit, packing winds of over 205 =km/h, and gusts of as much as 305km/h. – Additional reporting: Reuters