Mao Zedong’s hometown is gearing up for a big celebration, but Beijing is more wary 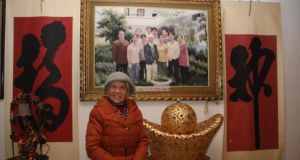 Tang Ruiren, the great-aunt of Mao Zedong, poses in front of a photograph of her family. “Everybody learns Mao’s ideology,” she says. “The situation changes continuously, but socialism keeps moving forward.”

Grandma Tang Ruiren is gearing up for a major celebration to mark the 120th anniversary of chairman Mao Zedong’s birth in his hometown of Shaoshan on December 26th. But the central government in Beijing is keen to tone down the festivities.

The local government is planning to spend hundreds of millions of yuan on the celebration, but Chinese president Xi Jinping has called for a “pragmatic” event to mark the Great Helmsman’s anniversary.

The founder of modern China is a controversial figure, at home and overseas, because of the disastrous agricultural collectivisation reforms of the Great Leap Forward and the destructive ideological zealotry of the Cultural Revolution (1966-1976). In Shaoshan, however, he is revered.

“We have everything ready for our 120th anniversary, lots of red food, peppers, and the bosses of our chain of 300 Mao Jia restaurants are getting ready,” says Tang.

“We will have noodles to celebrate long life for free, and discounts on other food. We invite everybody from China and all over the world to eat long-life noodles that day.”

Tang (83) met Mao back in 1959 and proudly displays a photograph of her holding her son during the visit. Although many years younger than him, she is Mao’s great-aunt.

The baby she is holding in her arms in the picture went in his early teens to fight in China’s war against Vietnam. He was Mao’s uncle. Her husband was a soldier too, as was her father.

Communist tradition
Tang is a fierce ideologue, steeped in communist tradition, even while enjoying the fruits of capitalism with Chinese characteristics, such as her chain of restaurants with its signature dish of Chairman Mao’s Favourite Pork, her private art gallery and the waxwork figure of herself she has installed in a shrine to her achievements.

“Chairman Xi is the same as chairman Mao. He is making a great dream for Chinese people. Everybody learns Mao’s ideology. The situation changes continuously, but socialism keeps moving forward and is great,” she says.

“Changes happen all the time, so the Communist Party can’t always stay the same. Chinese people will not forget history. Mao has said that only people are the driving force of the world history.”

Dealing with Mao is a delicate balancing act for Xi, who was installed in March and whose father Xi Zhongxun was a key figure in Mao’s army during the Civil War and subsequent 1949 revolution.

Mao’s face adorns every banknote and his portrait gazes out over Tiananmen Square in Beijing. Xi is keen to harness “Mao Zedong Thought” to bolster his campaign to reduce growing inequality and combat corruption.

Xi has at times adopted a neo-Maoist approach to assuage the traditionalist side of the Communist Party, but he is keen to establish himself as a reformer and has been careful to keep some distance between himself and Mao.

Too much Mao can be a bad thing. Disgraced former senior leader Bo Xilai was purged ostensibly for his neo-Maoist campaigns in the southwestern city of Chongqing.

Mao as an ‘idol’
Zhang Lifan’s father, Zhang Naiqi, was a key figure in the founding of the People’s Republic and suffered during the Anti-Rightist Campaign of the 1950s and again in Mao’s Cultural Revolution in the 1960s.

“The main aim of the 120th anniversary is to keep Mao in place as an idol. If they don’t, the central government is afraid the legality of the Communist Party can’t be guaranteed,” says Zhang.

He believes the local government has taken things too far, but the Beijing central government is wary of being too positive of Mao as it could undermine its reform programme.

“Mao’s fans or his supporters are often marginalised, their living conditions are not so good and they miss the days of Mao. They are brainwashed but at the same time it means they are not happy with the reality and are dissatisfied with the current situation.”

During a visit to Hunan in November, Xi avoided Shaoshan, where municipal authorities are planning celebratory events including a large-scale cultural performance, a national cycling competition and a photography exhibition.

Major event
A major event called “Reddest in the sun and the dearest is Chairman Mao” has been incorporated into a Chinese New Year show at the Great Hall of the People in Beijing.

A 100-episode TV series called Mao Zedong was due to be shown this month, Hunan Television reported, but it has been replaced by another historical drama.

Near the simple, prosperous-looking homestead that was Mao’s childhood home, a group of women from Hunan are singing his praises.

“Chairman Mao is the greatest. We miss him, so we come to Shaoshan to commemorate him,” says Mo Dihang, a retired bank worker. “The changes happening today in China stem from Mao. Of course he would be happy with the way things are going.”

Lin Ailian, a housewife, believes Mao was the greatest leader China has had.

“Chairman Xi is a successor of Mao. Chairman Xi is not bad. Our favourite thing here is the statue of Mao in the square. Whenever we miss him, we come here.”

Deep respect
Wang Yanlao, a businessman from the southern province of Fujian, says Mao is held in deep respect.

“If he were still alive, he would be happy to see all the achievements and the hard work the current leaders are doing for China,” says Wang.

A group of young men working for the TCL electronics company were moved to tears by tales of Mao’s exploits on the bus on the way here.

“We were all very moved. After being here, we can’t imagine that a great man like him lived in such a condition. We looked at every room and it was all very simple,” says Xiao Wen.

His colleague Xiao Hu agrees, adding:“He would have been very happy with China today, because he is very ambitious. He would have hoped that China would become more powerful.”