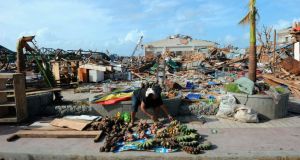 A man sells root crops and fruits next to a destroyed public market in Guiuan in the province of Eastern Samar, Philippines. Photograph: Ted Aljibe/Pool via The New York Times

The town of Guiuan was the first to face the fury of typhoon Haiyan when it tore into the Philippines last Friday morning.

The 275kph winds destroyed the municipal government office, the sports centre and the public market. It ripped rooftops apart, smashed walls, lifted vehicles off the ground and dumped them several metres away. Even the 16th-century Catholic church, one of the oldest in the Philippines and which had previously withstood earthquakes, was ruined.

“It was like a tornado. People were saying it was the deluge, the coming of Christ, the Armageddon,” said Christopher Sheen Gonzales, Guiuan’s mayor, who survived the deadly winds by huddling in a bathroom with family members and helpers for almost three hours on November 8th.

Yesterday the death toll in Guiuan stood at 87, with almost 1,000 people injured. The town was ripped apart, sparking fears among officials that the typhoon could further impoverish people in an already very poor region.

Rich fishing waters
The storm shattered not just houses and lives but also the hundreds of fishing boats on which 80 per cent of the town’s 47,000 population depend for a living.

The rich fishing waters are a big source of fish for the eastern Visayas region. Most of the coconut trees were also destroyed, cutting off a source of income for the villagers who sell coconut meat to be processed into refined oil.

Gonzales called on the government to help fishermen acquire new boats so they could start earning money again.

“I am appealing to people who want to help us. In order for us to rebuild our town immediately, the national government, the local government units and foreign aid [organisations] should help give fishing boats to our fishermen,” he said.

The town’s inhabitants are starting to rebuild their lives, a week after the typhoon hit.

Across Guiuan there were plenty of signs of people resuming their lives even as the streets were being cleared of debris and the local government struggled to deliver food and water supplies to remote villages.

The public market was flattened but Benjamin Buenavista, a 55-year-old shopkeeper, has already started selling rice and sugar from his rain- damaged stock. So far, he is making 300-400 pesos a day, compared with the 3,000 pesos a day he made before the typhoon.

“It will probably take me five years to recover everything I have lost,” he said.

‘Comfort room’
When Herminio Herminan received the warning from the government, he decided to stay put. He has a small house near the mayor’s mansion and thought the property’s tall cement fence would fend off Typhoon Haiyan.

But as the winds got stronger, he took his wife and two children to his aunt’s bigger and sturdier house. During the night, the roof blew off.

Everyone – 11 men, women and children – rushed to the small bathroom. One of his uncles hid in a cabinet below the sink. When Mr Herminan and his relatives emerged the next morning, they found their town destroyed.

Many other families found refuge in their bathrooms, which Filipinos call the “comfort room”. In a moment of levity, some councillors suggested the town build a monument to the comfort room because so many people owe their “second life” to what turned out to be the sturdiest part of the house.