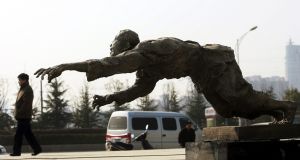 A sculpture at the Memorial Hall of Victims in the Nanjing Massacre in Nanjing, China. Photograph: China Photos/Getty Images

Japan took its long war with China over history into unchartered territory this week when it threatened to stop funding Unesco. The trigger was a decision by the UN heritage body to add Chinese archival documents on the 1937 Nanjing Massacre to its “Memory of the World” register.

China “should not unnecessarily use the arena of Unesco for a political purpose”, said Japan’s official protest after the decision was made. The government of prime minister Shinzo Abe says Beijing is exploiting the past to embarrass Japan and advance its own interests.

Tokyo’s charges of political opportunism rang hollow to some: it was accused of doing something similar earlier this year when it registered much of its early industrial heritage with Unesco. China and South Korea said Japan was hiding the history of forced labour at some of the sites.

That dispute ended with a shaky compromise in which Japan agreed to explain that Koreans had been taken to some of the sites, including mines and ports, against their will and “forced to work under harsh conditions”. The Nanjing row, however, may not be so easily resolved.

For one thing, the level of distrust between Asia’s two most powerful nations is sky-high: a record 93 per cent of Japanese have an unfavourable impression of China, according to the most cited annual survey. For another, Nanjing has haunted bilateral ties for decades.

The Society for the Dissemination of Historical Fact, a revisionist pressure group, said on Friday the massacre is “nothing more than wartime propaganda” and accused Unesco of being a propaganda organ of the “Chinese Communist Party dictatorship”.

Such views are extreme, but Japanese media and schools increasingly tiptoe around Nanjing and other war crimes. History textbooks are bone-dry recitals of dates and facts, carefully monitored by education bureaucrats. The second World War is skimmed over in a handful of pages. Japan’s media increasingly refer to Nanjing as “an incident” and avoid citing casualty figures. Popular culture extols the revisionist cause.

China says that trend has accelerated under Mr Abe.

Some scholars worry that accounts of wartime atrocities will vanish from Japanese consciousness, along with accounts that it was Japan that started a war of aggression in Asia.

Beijing has used mass entertainment to stoke anti-Japanese sentiment. For example, it funds more than 200 movies a year on the heroic communist resistance to the invaders. China’s “patriotic education” policy helps explain why anger at Japan seems to grow the further the second World War recedes into the past.

It is against this background that China has gone to Unesco with its Nanjing documents. Japan’s angry response is part of a growing PR blitz being waged by its diplomats and politicians. In the latest salvo, thousands of revisionist books have been sent to foreign academics and journalists.

Even so, Japan’s threat to Unesco has stunned old political hands.

Japan’s 3.7-billion-yen contribution to the Unesco budget last year was more than 10 per cent of its budget.

Yohei Kono, a former foreign minister and veteran member of Mr Abe’s Liberal Democratic Party, called the threat “absolutely shameful” and said Unesco does a lot of vital work around the world.

“What is the government thinking?” he asked. “It is not in Japan’s interests to make such a threat.”