Italian authorities have released surveillance footage of the moment a motorway bridge collapsed in Genoa, Italy. Over 40 people were killed in the incident. Video: Guardia di Finanza Genova 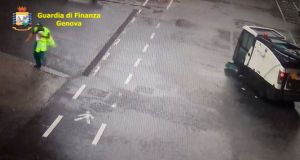 A municipal worker on the street prior to rubble falling onto the road as the Morandi motorway bridge collapsed in Genoa last week. Photograph: Guardia di Finanza press office/AFP/Getty Images

CCTV footage has emerged of the moment when a bridge collapsed in Genoa last week, killing more than 40 people.

The footage shows a male municipal worker having a narrow escape when he crosses a section of road under the bridge just seconds before concrete rains down.

The Italian government is working on penalties it could apply against bridge operator Atlantia unit Autostrade per l’Italia, prime minister Giuseppe Conte said on Tuesday.

“This file [on penalties] is in my bag and has been traveling with me these last few days,” Mr Conte said in an interview in Il Corriere della Sera.

Mr Conte said the €500 million offered by Atlantia to help the victims of the disaster was a modest amount.

“They could quadruple or quintuple that in the meantime,” he said.

Asked if the government planned to nationalise the motorway concession sector, Mr Conte said the government was examining the best way to meet the public interest.

He said Rome had already received alternative offers to Atlantia to rebuild the bridge. – Reuters