Former China security chief Zhou to be investigated for corruption 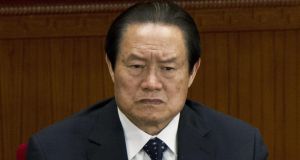 China’s corruption crackdown is set to claim its most senior scalp to date, with the news that Zhou Yongkang, the former security czar who sat on the all-powerful standing committee of the Politburo, is to be investigated for graft.

The investigation into Mr Zhou (71), who retired from the standing committee in November, is a sign that President Xi Jinping is cementing his authority at the helm of the world’s most populous nation.

The move comes just days after the highly public trial on corruption charges of former rising star Bo Xilai, who was seen as an ally of Mr Zhou, and will send even greater shockwaves through the Chinese political establishment.

Although retired, Mr Zhou is one notch higher in the Communist Party’s power structure than Mr Bo.

“Current and retired top leaders endorsed the decision earlier this month during the secretive annual party meeting at the resort of Beidaihe in Hebei province,” ran the report in Hong Kong’s South China Morning Post, citing sources “familiar with the leadership’s thinking”.

No member of the Politburo standing committee, either a sitting member or retired, has been investigated for economic crimes since the 1980s.

Official corruption is the number one complaint among the Chinese people about the government. The investigation is aimed at showing that no one, even senior cadres, is exempt from investigation into graft.

The party is trying to shore up its legitimacy as its new leaders tackle corruption and for Mr Xi, fighting corruption is essential if the party is to maintain its 64-year hold on power. He has said anti-corruption efforts should target low-ranking “flies” as well as powerful “tigers”.

Mr Zhou was in charge of the judicial system and was brought in to beef up domestic security and to keep a tight lid on dissent, maintaining stability and public order.

According to the South China Morning Post, the investigation, which has been rumoured for months, is focusing on oilfield and property deals that have benefited Mr Zhou and his family, particularly deals involving his son, Zhou Bin. .

Mr Zhou was said to be grooming Mr Bo to succeed him on the standing committee. There are indications that the investigation could be widening to include some of Mr Zhou’s close allies.