The family of human rights defender, Guo Feixiong, was in Dublin to accept an award on his behalf from Front Line Defenders. Guo Feixiong has been imprisioned in China since 2013 without being convicted of a crime. 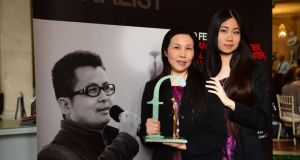 The passion and pathos of a young woman’s musical tribute to her father filled the rotunda of Dublin’s City Hall yesterday as the jailed Chinese lawyer and human rights activist Guo Feixiong was announced as the recipient of the Frontline Defenders human rights award for 2015.

Yang Tienjiao (18), also known as Sara, played with verve and intensity for the approximately 180 guests at the Frontline awards breakfast.

She wrote the seven-minute piece, entitled The Cosmos, shortly after her father was arrested by the Chinese authorities in 2013. The title of the work, she explained afterwards, came from her and her father’s belief that “dreams can be as big as the cosmos [and] we can shine like stars”. As she received sustained applause, playwright and novelist Sebastian Barry, who presented the award, said: “May those notes fly like house martins to your father in China”.

Guo Feixiong, who is 49, is imprisoned in the southern Chinese city of Guangzhou (formerly known in the West as Canton), although he has not been convicted of any crime. He was arrested in 2013 as a result of addressing a group of people in public, and was charged with “gathering a crowd to disrupt order in a public place”.

Accepting the award on behalf of her husband, Zhang Quin described him as a “faithful idealist”.

“There is a thing called goodness in the world after all despite the relentless experience of its opposite,” he said. “Surely we are justified in asserting that no matter what is done to him, something of Guo Feixiong will always remain, that cannot be rescinded even by the elephantine powers of government.”

Frontline Defenders chairman, businessman Denis O’Brien whose charity, the Iris O’Brien Foundation is a major funder of the organisation, said that in the face of spreading repressive legislation and an escalation in the number of attacks and killings of human rights defenders, there was a “counter movement of wonderful people doing extraordinary things”.

“These are the people who have a vision of a more just and equal society who believe that it is worth almost any sacrifice to achieve it . . . People who remind us of mankind’s more noble side,” he said.