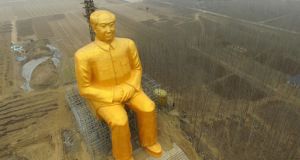 Chinese villagers have built a giant golden statue of the late Communist Party leader and founding father of the People’s Republic of China, Mao Zedong, in the countryside.

According to villagers in Zhushigang in the Tongxu prefecture in the central province of Henan, the funding for the 26.6m statue, which cost nearly three billion yuan (€427,000), came from local businesses as well as some funding from residents.

This year is the 40th anniversary of the Great Helmsman’s death. He is revered in China and his face adorns every banknote, although he is blamed for the deaths of tens of millions in the failed agricultural experiment known as the Great Leap Forward. Henan province was one of the worst hit areas by the experiment in the 1950s.

He was also responsible for the Cultural Revolution, a period of ideological fundamentalism which saw hundreds of thousands oppressed and struggled against by Red Guard zealots, especially intellectuals.

The sculpture shows Mao seated, his hands crossed in his lap. Some online commentators have said it doesn’t resemble the chairman too much. The project began in March last year and is shortly due to be completed, a Mr Jia, who is in charge of construction, told local media.

“It is good that we remember his good deeds in our hearts and his mistakes will eventually be forgotten. But why waste so much money to build something without any spirit. It’s like Chairman Mao badges – it’s enough to respect his memory,” one online commentator, Liang Fei, wrote on qq news.

Another writer Tiaogao Yundan posted that the statue was “meaningless.”

There are statues of Mao in the central squares of many Chinese cities – his portrait hangs over the entrance to the Forbidden City in the heart of Beijing.

In 2009, to mark the 115th anniversary of his birth, a 32m high statue was erected in Changsha, in his home province of Hunan.