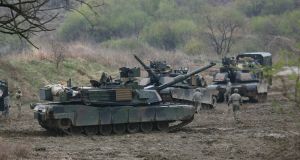 US army tanks conduct a military exercise in Paju, near the border with North Korea, in South Korea on Friday, April 14th. Photograph: Ahn Young-joon

As tensions simmer in the Korean peninsula, with US warships steaming into the region and alarm at the likelihood of another North Korean nuclear test, China warned that war could break out at any time.

“Lately, tensions have risen . . . and one has the feeling that a conflict could break out at any moment,” Chinese foreign minister Wang Yi told a news conference with his French counterpart, Jean-Marc Ayrault. “If a war occurs, the result is a situation in which everybody loses and there can be no winner.”

North Korea has conducted a raft of missile and nuclear tests in defiance of UN and unilateral sanctions, and there is anxiety it might stage a sixth nuclear test on Saturday to coincide with the “Day of the Sun’”, the 105th anniversary of the birth of state founder Dear Leader Kim Il-sung.

China has repeatedly warned the US not to risk military intervention to quell the North’s nuclear ambitions and is calling for talks to settle the crisis.

Despite a broadly positive meeting between US president Donald Trump and Chinese leader Xi Jinping in Florida last week, uncertainty remains about what line Mr Trump might adopt, after he fired 59 Tomahawk missiles at a Syrian airfield in response to a deadly gas attack, and said the North Korean situation “will be taken care of”.

“We call on all parties to refrain from provoking and threatening each other, whether in words or actions, and not let the situation get to an irreversible and unmanageable stage,” said Mr Wang.

There is also considerable Chinese anger about South Korea’s deployment of the US Terminal High Altitude Area Defence (THAAD) anti-missile system, which Seoul says it needs to protect against rising belligerence from North Korea, but China believes will be used strategically against its missiles.

“It’s not hard to see that ever since the United States and Republic of Korea decided to deploy THAAD, the situation has not become harmonious but has become more tense,” Chinese foreign ministry spokesman Geng Shuang said.

“The deployment of THAAD will not help the denuclearisation on the Korean peninsula and maintain the peace and stability of the peninsula,” he said.

“On the contrary, it impacts the strategic and security interests of all countries in the region, including China, and also disrupts the regional strategic balance,” added Mr Geng.

The US navy nuclear-powered USS Carl Vinson strike group is heading into the area, and North Korea has slammed the US for bringing nuclear capabilities into the region.

“The US introduces into the Korean peninsula, the world’s biggest hot spot, huge nuclear strategic assets, seriously threatening peace and security of the peninsula and pushing the situation there to the brink of a war,” the North’s KCNA news agency said on Friday, citing a statement from the Institute for Disarmament and Peace.

“This has created a dangerous situation in which a thermo-nuclear war may break out any moment.”

US vice-president Mike Pence travels to South Korea on Sunday on a 10-day scheduled trip to Asia.