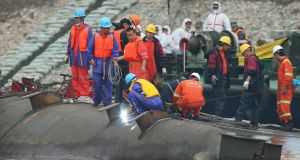 Rescuers trying to find survivors from a cruise ship that sank in the Yangtze River cut into the ship’s hull as hopes faded of finding more people alive. Photograph: Wu Hong/EPA 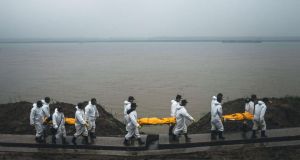 Rescuers carrying the bodies of the victims of the capsized Chinese cruise ship walking on the riverbank in Jianli, central China’s Hubei province. Photograph: AFP/Getty Images 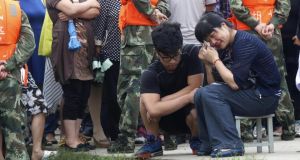 Frustrated by the scarcity of information from local authorities, about 50 family members hired a bus to take them from Nanjing to Jianli county in Hubei, an eight-hour journey. Photograph: AFP/Getty Images

China has pledged that there would be “no cover-up” of an investigation into the sinking of a cruise ship on the Yangtze River, which has left 65 people dead and over 370 missing, as angry families gathered near the rescue site to demand answers.

President Xi Jinping convened a special meeting of the ruling Communist Party’s Politburo Standing Committee, the apex of power in the country, on Thursday to discuss the disaster, state news agency Xinhua said.

Authorities are investigating the crew members who were rescued from the Eastern Star, which capsized in a freak tornado on Monday night, and were “gathering evidence”, Xu Chengguang, the spokesman for the Ministry of Transport, said.

“We will never shield mistakes and we’ll absolutely not cover up (anything),” Xu told a news conference on Wednesday night, adding a preliminary investigation had begun.

The Politburo Standing Committee called on rescuers to “take all possible measures” to save the injured and urged a “serious investigation into the cause of the incident”, Xinhua said.

They also stressed that “the work of appeasing the families is very important” and called on local party committees and governments to “earnestly understand the families’ grief, carry out appeasement efforts and earnestly safeguard social stability”.

Only 14 survivors, including the captain and chief engineer, have been found since the ship carrying 456 people capsized, in what could be China’s worst shipping disaster in almost 70 years.

Police have detained the captain and chief engineer for questioning. An initial investigation found the ship was not overloaded and had enough life vests on board.

The announcement of the investigation came hours before dozens of relatives broke through a police cordon in bid to reach the disaster site.

Frustrated by the scarcity of information from local authorities, about 50 family members hired a bus to take them from Nanjing to Jianli county in Hubei, an eight-hour journey.

The ship had been on an 11-day voyage upstream from Nanjing, near Shanghai, to Chongqing.

Relatives have asked the government to release the names of survivors and the dead, and questioned why most of those rescued were crew members. Some have also demanded to know why the boat did not dock in the storm, and why the rescued captain and crew members had time to put on life vests but did not sound any alarm.

On Thursday, there was a heavy security presence outside one of the hotels where some family members were staying.

“Right now the government has an attitude of complete apathy towards us,” said Cao Feng (40) whose parents were on board. “We just want to be closer to our relatives.”

June 4th marks the anniversary of the 1989 crackdown on pro-democracy demonstrators around Beijing’s Tiananmen Square, and protests are usually quickly halted in China.

Rescuers are not giving up their search of the ship, which was carrying many elderly Chinese tourists, despite the fading hopes of relatives.

They have begun cutting small holes through the Eastern Star’s upturned hull to get better access, although no more survivors have been found, state media reported.

The search area has been extended up to 220 km (135 miles) downstream, suggesting that bodies could have been swept far from where the ship foundered. Reuters