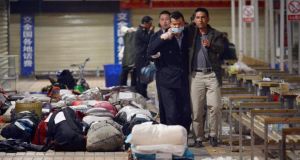 A worker helps a man after a deadly knife attack, at the railway station in Kunming. EPA/SUI SHUI CHINA OUT

Four people have been charged in China for their alleged role in a deadly knife attack at a railway station in the southwestern city of Kunming in March, state media reported, in a case that started a nationwide crackdown on separatist violence.

Twenty-nine people were killed and 140 injured when eight knife-wielding assailants from the restive and ethnically divided region of Xinjiang, home to mainly Muslim Uighurs, attacked the station in Yunnan province. Police shot four of the attackers dead.

The Kunming attack sent shock-waves across the country and raised fears of similar terror attacks nationwide. Weeks later, in May, a suicide bombing killed 39 people at a market in Xinjiang’s capital, Urumqi.

“The crimes of the four defendants are clear and the evidence is abundant,” the prosecutor statement said.

In the vast majority of cases in China defendants are found guilty when tried.

The four defendants, all of whom have Uighur names, are likely to be given the death penalty.

Meanwhile a court in Kashgar in Xinjiang has sentenced 113 people to jail in 69 cases, most of them terrorism-related. While the court did not specify what ethnicity the defendants were, the names of most sentenced appeared to be from the region’s Uighur Turkic Muslim ethnic group.

Four suspects were sentenced to life in prison, while 109 others were given sentences for crimes ranging from “organising and leading terrorist groups” to “bigamy and drug dealing”, in a year-long campaign to combat terrorism, Xinjiang’s government web portal Tianshan said.

Beijing blames the East Turkestan Islamic Movement for past violence in Xinjiang, saying it is China’s most potent security threat. The movement was founded by a Uighur separatist and listed as a terrorist organisation by the US state department in 2002.

President Xi Jinping has pledged to come down hard on religious extremists and separatist groups in the province.

Many Uighurs feel overwhelmed by the influx of Han settlers, and feel they have no way to voice their grievances about how they are officially treated.

At least 380 people have been detained in the last month in the current crackdown on violence in Xinjiang.