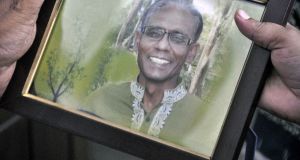 A man holds a portrait of Bangladeshi professor Rezaul Karim Siddique, who was hacked to death by unidentified attackers in Rajshahi. Photograph: MD Abdullah Iqbalmd/AFP/Getty Images

A university professor in north-western Bangladesh has been hacked to death on his way to work in an attack similar to other killings by suspected Muslim militants.

Police say AFM Rezaul Karim Siddique was attacked on Saturday on his way to the state-run university in Rajshahi city, where he taught English.

No groups have claimed responsibility for the attack and police are investigating.

At least three other professors at Rajshahi University have been killed in recent years allegedly by Islamist groups.