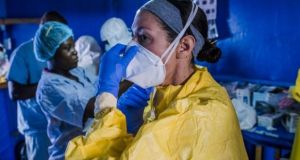 Australia’s top Ebola official challenged the government’s blanket ban on visas from West African nations affected by the virus, saying the measure was not supported by medical evidence.

Opposition groups hit out at the ban, calling the conservative government’s move mean-spirited and small-minded.

Australia came under fire from health experts and rights advocates yesterday after it said that it would stop issuing visas to citizens of Sierra Leone, Guinea and Liberia.

The government said the ban was a necessary precaution, but Dr Lyn Gilbert, a leading infectious disease expert who was earlier this month placed in charge of the nation’s response to the virus, said there was no evidence to back its claim.

Gilbert is the top government medical official to speak out against the ban, which was criticised by leaders in Liberia and Sierra Leone as draconian and discriminatory.

“The evidence indicates that an asymptomatic traveller from an Ebola-affected country, who has not had contact with a symptomatic person suffering from Ebola in the last 21 days poses no risk to anyone,” she said.

The World Health Organisation has similarly stated that an asymptomatic traveller was not a risk of transmitting Ebola, and has sharply spoken out against international travel bans. The World Bank echoes this sentiment.

Australian prime minister Tony Abbott defended widespread criticism of the ban from the broader medical community, singling out the Australian Medical Association, whose president had called the move not “well-focused”.

“I do not always agree with the Australian Medical Association, but I take them seriously and I think that the AMA invariably has the national interest at heart,” Mr Abbott said.

Australia has not recorded a case of Ebola despite a number of scares, and Mr Abbott has so far resisted repeated requests to send medical personnel to help battle the outbreak on the ground.

A number of US states, including New York and New Jersey, have imposed mandatory quarantines on returning doctors and nurses amid fears of the virus spreading outside of West Africa. Federal health officials say that approach is extreme.

Under the new rules, all non-permanent or temporary visas were being cancelled and permanent visa holders who had not yet arrived in Australia will have to submit to a 21-day quarantine period.

The opposition Labor and Greens parties hit out at the policy today, joining forces to pass a motion in the upper house senate to force the government to reveal the advice under which it formulated the policy.

Greens senator Sarah Hanson-Young said the ban was an extension of other tough government policies that have earned Australia rebukes from the United Nations, such as the mandatory detention of asylum seekers.

“Banning refugees from West Africa is like shuttering up the windows of a house while it burns to the ground,” Ms Hanson-Young said.

“Australians want to help fight Ebola, but they’re being held back by this mean-spirited, small-minded and hard-hearted Abbott government.”