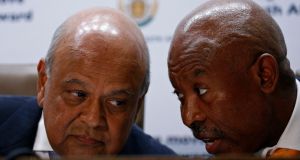 South Africa’s new finance minister – its third in four days – has moved to calm markets and investors unnerved by an astonishing week in South African politics, which ended with President Jacob Zuma bowing to pressure over his handling of the finance portfolio.

At his first press conference since his appointment on Sunday night, Pravin Gordhan assured onlookers fearful that the country is on the brink of an economic crisis that the government’s fiscal policies would remain prudent and sustainable, and unaffected by Mr Zuma’s sacking of the widely admired finance minister Nhlanhla Nene last week.

In the wake of Mr Nene’s removal, which was heavily criticised, the rand hit all-time lows against the US dollar, euro and British pound.

In addition the market value of the 17 financial and property shares in the Johannesburg Stock Exchange’s Top 40 reportedly lost a combined R290 billion (€17.3 billion) in the two sessions after Mr Nene’s exit.

He added that government was aware of the damage done to the economy over the past few days and it intended restoring confidence in it by “doing the right things”.

“Our focus in the coming months will be to do the following, among other things, diligently: We will stay the course of sound fiscal management; we can have extra expenditure only if we raise extra revenue,” he maintained.

Mr van Rooyen was in his new position just four days when the public outcry against his appointment, combined with the crash of the South African currency and markets, prompted Mr Zuma to do an about-turn on his selection.

In response to Sunday’s appointment Democratic Alliance leader Mmusi Maimane said that Mr Gordhan must stand up to Mr Zuma and ensure he stopped “playing Russian roulette with our economy”.

United Democratic Movement leader Bantu Holomisa said that despite the change Mr Zuma should be recalled by the ANC hierarchy with immediate effect. “It’s clear President Zuma has lost control. He is actually panicking beyond comprehension as we speak,” he said.

The South African rand, however, responded well to the new appointment, and had strengthened by more than 4 per cent in early trade on Monday. The markets were also showing signs of recovery.

How Mr Zuma will be affected by this latest crisis in the short term remains unclear, but many analysts said the events had weakened him significantly, portraying him as a leader who is unsure of what he is doing.

As commentator Stephen Grootes said in his column for the Daily Maverick: “On Wednesday Zuma was in a position of extreme strength when he removed Nene, believing that the move would assert his authority and shut down dissent. By Sunday, he was exposed as a weak leader who acted recklessly without proper advice, appointing a rookie to act as a political handyman rather than the head of the Treasury.”

1 Coronavirus: One more death in Republic as expert warns house parties are ‘disaster’ for containment
2 ‘Frustrated and angry’: Thousands march in Dublin to protest death of George Floyd
3 Search underway for missing boy (5) in Lough Mask, Co Mayo
4 Schools may reopen in July for children with special needs
5 US protest violence is being blamed on extremists. Who are they?
Real news has value SUBSCRIBE