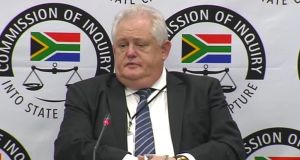 A former executive of a multibillion-rand facilities company giving evidence at an inquiry into public sector corruption in South Africa has implicated the ruling party in fraud that benefited its election campaigning.

Angelo Agrizzi, a former chief operating officer at a corporate group called Bosasa, which has recently been renamed African Global Operations, on Friday alleged the firm laundered money for the African National Congress (ANC) to use for electioneering in the North West Province.

On day three of his explosive testimony at the Commission of Inquiry into State Capture, Corruption and Fraud in the Public Sector in Johannesburg, Mr Agrizzi claimed the ANC-led provincial government paid the company for non-existent work at youth centres across the province.

Bosasa kept a small amount of this money, according to Mr Agrizzi, but channelled millions of rand (hundreds of thousands of euro) to the ANC in 2014 for what he believed was electioneering purposes.

The revelation was one of many jaw-dropping moments in a dramatic week at the inquiry in which Mr Agrizzi, who worked for Bosasa for nearly 19 years up to 2016, was unveiled by prosecutors as a surprise whistleblower on Wednesday.

However, the allegations that emerged this week may take the spotlight off the Guptas for a time, as they suggest that high-level corruption in the public sector is more endemic than previously feared.

Bosasa has been accused of corruption a few times in recent years, but this is the first occasion a senior executive from the company has talked openly about the company’s alleged illicit activities in a public inquiry.

Mr Agrizzi claimed he had decided to come clean about the corruption at Bosasa following a near-death experience in 2016 involving heart surgery, and he wanted people to know the extent of it.

He told deputy chief justice Raymond Zondo that every state contract the facilities company secured during his near two decades at the firm was tainted by bribery and corruption.

“I was involved in unlawful acts for a long period of time,” Mr Agrizzi said in his opening remarks.

“My last date of work was December 15th, 2016. I had become blunt and accepting of what had happened. I should have exposed unlawful activities from day one. [But] you become so engrossed in this cult,” he maintained.

Mr Agrizzi said that at the height of his involvement, about 80 politicians and officials were bribed monthly by Bosasa to secure and retain lucrative security, catering and other services contracts at public sector enterprises.

Contracts that Bosasa was awarded, including by Airports Company South Africa, the Post Office, and the Chemicals, Energy, Paper, Printing, Wood and Allied Workers Union, during Mr Agrizzi’s time at the company involved bribing officials at each organisation, he maintained on Wednesday.

He also described in minute detail the mechanics of how Bosasa pursued, corrupted and then ensnared strategic individuals at the target entities so the services company could grow its portfolio of contracts.

Bribes were paid each month rather than in a lump sum, he explained, to those found to be corruptible, as it ensured they were entrapped and beholden to Bosasa going forward.

“You don’t entrap somebody for life when you pay them once-off because they take their money and they go and do something else,” Mr Agrizzi said, “but once you start paying people bribes on a monthly basis you control them 100 per cent.”

Mr Agrizzi described how Bosasa handed over up to six-million rand (about €383,000) each month in bribes to various officials at companies it was doing business with. However, this was a “drop in the ocean” compared to the money it made from the tenders it won, he said.

Bosasa chief executive Gavin Watson, who has strong links to the ANC through his family’s credentials as longstanding anti-apartheid activists in the 1970s and 1980s, was portrayed as the mastermind of the criminal enterprise.

A video clip secretly recorded in 2017 that was played at the inquiry showed Mr Watson in a secure vault located in Bosasa’s head office counting out piles of money that amounted to a million-rand bribe for undisclosed individuals.

Mr Agrizzi went on to say that his role in the scheme was to prepare and package the bribes that Mr Watson referred to as “monopoly money”. The cash was put into grey bags, and codes were created and put on them so Mr Agrizzi knew who was being paid what, and who delivered the money, he said.

Company employees were also paid “hush money” to buy their silence, Mr Agrizzi added, and if anyone questioned the corruption Mr Watson made sure they were alienated, intimidated and then fired.

Individuals implicated in corruption by Mr Agrizzi’s evidence this week will be able to cross-examine the former Bosasa executive at a later date, Judge Zondo has confirmed.

Mr Agrizzi will continue giving his evidence on Monday.