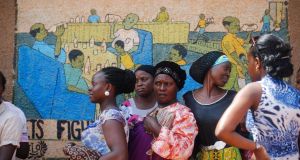 Women queue to cast their votes in presidential and parliamentary elections at a polling station in Nabweru, Kampala, on Thursday. Photograph: Dai Kurokawa/EPA

Ugandans began voting on Thursday in a presidential election that pits President Yoweri Museveni, in power for three decades, against a long-time rival who said he did not believe the vote would be “free and fair”.

All sides contesting the election accuse each other of stoking tensions and assembling vigilante groups, and the leading opposition candidates have predicted vote rigging.

“Such a day is highly undermined by the lack of free and fair elections,” opposition candidate Kizza Besigye said as he cast his vote in Rukungiri village in western Uganda. Mr Besigye (59) has run unsuccessfully in three previous elections.

Mr Museveni (71) came to power in 1986 after waging a five-year guerrilla war and many Ugandans credit him with providing relative peace and economic stability. He is a staunch US ally; Ugandan soldiers lead an African Union peacekeeping force against Islamist fighters in Somalia.

But many voters among Uganda’s youthful population say they want change and blame Mr Museveni for not tackling endemic corruption or creating enough jobs.

“I was a baby when Museveni came in. Now, even my own children are seeing that same face. Is he the only one who can rule this country?” asked Uthman Kalyango (32).

His polling station was among many in the capital, Kampala, which opened hours after the official opening of polling at 7am local time, worrying many voters.

“We were almost ready to go away. We were getting tired,” he said, adding that he was supporting Mr Besigye, like many young voters interviewed by Reuters in the capital.

A second major challenger, former prime minister Amama Mbabazi, was a close ally of the president until a power struggle last year. He is also campaigning on promises of reform.

Martin Mwondha, national co-ordinator at Election Observers Network-Uganda, said voting was peaceful so far but there were multiple reports of polling stations opening late in and around Kampala and the nearby town of Jinja.

Among those waiting to vote was Joel Nyonyintono, a 26-year-old entrepreneur, who said he was ashamed of Uganda’s neglected roads and hospitals. “We are so far behind. We need to open our eyes and move into the ‘now’ tense,” Mr Nyonyintono said as he sat near a church in Kampala.

But other voters, such as 56-year-old fruit vendor Nanteza Beatrice, say change makes them nervous. “We have had peace for a long time and these young people are taking it for granted because they don’t know how it was before,” she said, referring to years when Uganda was ruled by two dictators infamous for unpredictable violence.

Mike Sebalu, campaign spokesman for the ruling National Resistance Movement party, said that he believed turnout would be high and urged a peaceful vote.

“It is the responsibility of every Ugandan to remain peaceful and not to engage in any public disruption,” he said in a statement.