Thousands of Malian refugees ‘on verge of going home’ 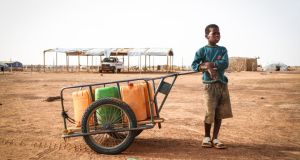 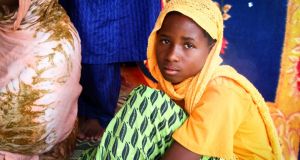 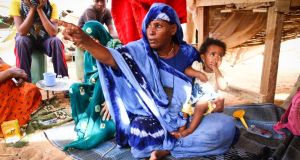 Tata Ment Alwata (60) who travelled by foot for 14 days to get to Burkina Faso, “without anything but a little water to drink”. Photograph: Sally Hayden 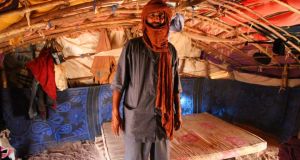 Abdullah Ould Mohammad (50) inside his shelter at the Mentao camp. Photograph: Sally Hayden

News of the intensifying clashes in their home country reaches the 12,000 Malian refugees in Mentao camp, Burkina Faso, mainly by word of mouth, meaning much of what they hear is vague or unconfirmed.

Most of them have been absent from their homeland for two years now, but while they still fear for their lives and fear that the violence is escalating, many are making the decision to return anyway.

The camp is just south of Djibo, in the Sahel region, where the temperature often reaches the high 40s. Flies buzz, chickens cluck, and the sound of babies crying is constantly in the air. Amid transient-looking tents with plastic coverings there are solar panels and satellite dishes.

Ali Kassoum (52) is an Arab from Timbuktu – 540km away – and the president of the camp’s mental centre committee. He has been living here since the violence broke out in 2012.

. You are not in your own house, you are a refugee, you are losing your personality and if we keep on this way people will turn mad and it will be a cycle of violence and rebellion.”

Tata Ment Alwata (60) fled Mali in March 2012, along with 11 members of her family. They travelled by foot for 14 days, “without anything but a little water to drink”.

She says their arrival in Burkina was hard. “With the change of environment we experienced a lot of illnesses when we arrived, mainly diarrhoea, malnutrition, fevers. Before we got acclimatised to it we met a lot of problems.”

Each refugee receives 6kg of rice a month from the UN’s refugee agency, the UNHCR, as well as 3,500 CFA francs (€5.34), a sum designed to give them some feeling of autonomy. But many complain that this is not enough.

Under a trial scheme, Alwata is one of 200 women who was given funding to begin trading in the camp. Together they breed animals for reselling and engage in trade on small items like cigarettes. “Just this feeling of doing something, being useful is enough for us at the moment.”

She says that “as soon as peace and security is back in Mali my first wish will be going back”, but she has to be certain the situation is stable. After all, she says, “terror is not something we heard about. It’s something we witnessed.”

Abdullah Ould Mohammad (50) shows us inside his tent, a sandy-floored dome containing just a mattress. During the wet season the ground is so dry that it floods.

He tells us his life was completely different in Mali. “I had my own house there.” But even if he was to return, he says that his house has been ransacked. “The doors, the mattress, the stools, they have all been taken.”

‘Ransack a house’
Regretfully, he adds that it was done by civilians. “When there is a time of trouble, even civilians will ransack a house.”

Ould Mohammad describes himself as a “simple trader” who is “not involved in political issues”, but says he fears the “Islamists”. This is his second time as a refugee in Burkina Faso. In 1994 he came here to escape conflict and says that he can see this pattern recurring again and again.

“Practically speaking they may sign a peace agreement and the peace may not hold, but that is always the case,” he says. Despite this, every time there is stability he will go home.

The UNHCR estimates that there are 32,170 Malian refugees in Burkina Faso at the moment, and 3,635 have returned.

While they say they still can’t recommend that anyone goes back, in recognition of these “spontaneous returns” they’re now implementing a scheme whereby each refugee who voluntarily makes the decision will be given 35,000 CFA francs (€53.40) to help with transportation fees.

This scheme is already operative in Niger, where they say 3,000 to 4,000 refugees have already availed of it.

Angele Djohossou, the deputy representative of the UNHCR in Burkina Faso, says: “We see that so many women, children, vulnerable people are trying to use all their means to return back home.” Even if conditions are not yet conducive, “we’ll feel morally comfortable if we give them the correct country information, preparing them for what they may meet when they get to the country”.

Incredibly demoralising
For men like Mohammad Ould Sid Amar (69), who in Mali was the leader of a “fraction”, a community of – in his case – 555 people, being dependent on handouts is incredibly demoralising. This month he says that he didn’t even receive his ration on time.

It was his sense of responsibility towards his community and his sense of purposelessness in Mentao that made him attempt to return to Mali in September 2013.

When he arrived he realised that his house had been robbed and his belongings stolen. Soon afterwards he called the Timbuktu governor to say he was back, but discovered that the governor had gone into hiding. A few days later four suicide bombers blew themselves up in his town, killing two civilians.

Amar found himself back at Mentao, but he says he’s not the only one who dreams of returning again. “Thousands of people are on the verge of going back.”

After all, “Burkina is a brotherly country but no brother can replace your father and your mother. And we’ve suffered a lot here. We had cultural habits like food, meat, milk, but when you are in a refugee status it is very difficult for you to live the way you want. Some of us had some well-made houses, and you see how we are living now. It is completely different.”