South Sudan on the brink of famine

Opinion: In marking World Humanitarian Day, we remember aid workers we have lost 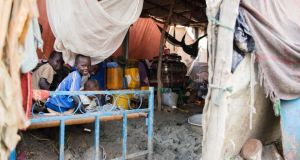 You can smell Bentiu camp in South Sudan before you see it – the stink of human waste hangs in the humid air.

Spend an hour walking around the camp and the overriding emotions are those of anger and frustration that people should have to live like this. People forced to flee fighting in South Sudan’s Unity state are now living in knee-deep, sewage-contaminated floodwater. Some have been forced to sleep standing up with children in their arms.

When the fighting broke out last December, some 4,000 people fled to the UN compound in Bentiu seeking protection. Located on low-lying wasteland that would in normal circumstances be deemed unfit for human habitation, the camp has seen numbers swell to more than 40,000. This massive displacement has been compounded by the onset of rains, which are due to last until November, and we are now struggling to meet the needs of acutely vulnerable people in what is, to all intents and purposes, a swamp.

Living conditions in the camp are are an affront to human dignity. Talk to any of the women living here and they tell the same story of how their homes have been burned down, their crops destroyed. With no alternative besides the likelihood of death should they attempt to return home, they are essentially trapped with their families in the overcrowded, flooded squalor of the camp.

The threats facing anyone who ventures outside the camp are horrifying. Frequently heard artillery fire and shelling provide a brutal reminder that going home is not an option. Men who venture outside risk being caught and killed – women and girls risk being abducted and raped. One woman said to me: “We have no choice but to stay here. We are living in mud, but we are safe.”

A handful of aid agencies, including Concern, have been working together to deliver lifesaving support, despite the massive security and logistical challenges. The recent killing of six NGO workers in Maban has highlighted just how dangerous our work can be.

In the Bentiu camps Concern has built temporary shelter for vulnerable women whose huts have been washed away. A 1.2-km drainage canal is being dug to draw the water off, with each agency working in the camps contributing to the cost. It is expected to be completed in seven days and it is hoped not too much heavy rain will fall between now and then.

Even more worrying is the increasing number of severely malnourished children showing up at our outpatient therapeutic centre. Our recent assessments in the camps showed more than 20 per cent of children under the age of five are malnourished and in need of urgent assistance, without which they face a high risk of dying. We are expanding our feeding programme to meet this need.

The scale of current needs is enormous. Of the estimated 12 million people in South Sudan, a third are at risk of severe food insecurity and there are growing concerns that famine may occur. The UN Security Council has now deemed the crisis to be “the world’s worst”. Famine conditions are rapidly mounting due to the collapse of markets, limited planting and the consequent poor to non-existent harvest. Epidemics, especially cholera, are a major concern in the camps. In the three most affected states – Jongeli, Upper Nile and Unity – data suggests 60-75 per cent of the population is in need of food supplies.

For aid agencies, obstacles have included active combat, looting of aid supplies, the killing and harassment of aid workers, and the underlying difficulty of accessing remote areas without any real transport infrastructure.

Due to the challenging conditions, the humanitarian community has been able to reach only about 10 per cent of children who we believe need nutrition treatment.

This week members of the UN Security Council are in South Sudan to reinforce the message to the political leadership, to implement the agreement that was signed May 3rd to end the fighting, resolve the crisis and establish a transitional government of national unity.

Every step must be taken to ensure an end to the conflict; anyone with any influence or pressure over this process must take action.

If the fighting continues, there is every chance we will not be able to prevent a famine.

Dominic MacSorley is chief executive of Concern Worldwide. He is currently in South Sudan